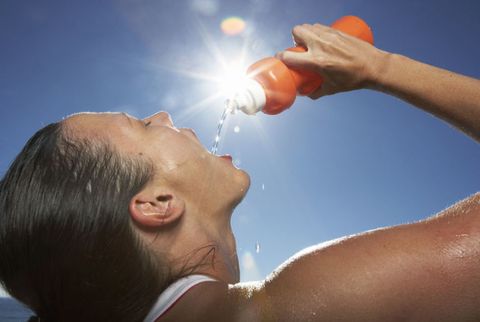 Celebrities do it all the time: In anticipation of a film or event, they whip post-baby bodies into top shape by training like madwomen — lunging, squatting, and tricep-dipping their way back into the size-00 kingdom of heaven.

The good news for the rest of us: a) We aren't endlessly scrutinized by paparazzi, and b) it doesn't actually take that kind of high-intensity training to reach peak form. In fact, most experts agree that by pushing your body to the limits, you're more likely to get injured, sick, or burnt-out than reach HD-ready perfection.

And yet, more Americans are engaging in extreme exercise than ever before. According to Running USA, a nonprofit organization based in Colorado Springs, the number of marathon finishers has increased by nearly 50 percent since 2000. Yoga, meanwhile, has exploded — going from 4 to 20 million practitioners in the U.S. alone over the last 10 years — with a surge of interest in vigorous forms like Bikram (hot yoga) and Ashtanga (an athletic series). Add to that the proliferation of high-octane boot camps, Spinning classes, and barre workouts — many of which inspire almost cultlike obsession.

"I'm back in my size-24 jeans," raves Tina Craig, a Dallas fashion blogger who takes back-to-back kickboxing and Pilates classes three days a week. But it wasn't just about the weight loss. "I felt like an old milking cow most days," says Craig, a mother of one who struggled with her post-pregnancy shape. "My exercise regimen was validation that I had some sort of control over my life, which had been taken over by an adorable but demanding little bundle." Tracy Stern, a Philadelphia- and New York-based tea entrepreneur known for her sleek physique and glamorous wardrobe, spent last year following a grueling workout schedule that included several yoga classes, two aerial gymnastics lessons, and boxing and Pilates classes — all in one week. "I was under the influence," says Stern, who felt pressure from friends to strive toward what she now considers an unnatural idea of physical perfection. At times, however, Stern admits she'd gone overboard. "I couldn't even brush my hair after," she says of one exceptionally strenuous period.

Indeed, it's precisely the going overboard that becomes the problem. What motivates people who exercise to extremes (excluding Olympic and professional athletes) often isn't good health, or even fitness. "It's fear," says Sheenah Hankin, a psychotherapist in Manhattan. "They think, If I don't exercise, I am going to gain weight, lose my muscle tone. It's emotional, not rational. It's a terrible trap," says Hankin, and akin to what happens in the minds of people with eating disorders.

"It's about control," echoes Loren Bassett, whose namesake boot camp, taught in 100- to 105-degree temperatures, at Pure Yoga in New York City, tends to draw a roomful of hyper-fit diehards. In other words, while you can't control every aspect of your life — in particular, the things that make you feel insecure or unhappy — you can control how much you exercise, like anorexics control how much they eat. Says Bassett, "The main thing is looking at the mind-set of the person. If you're feeling anxious when you can't exercise, that's a sign you've crossed the line between healthy and compulsive."

It's easy to see why so many women feel driven to push themselves the extra mile when 100-pound Hollywood actresses serve as cultural icons. But there's more to the super-fit trend than our collective obsession with celebrity bodies, says Christine Whelan, a professor of sociology at the University of Pittsburgh. Whelan notes that in our status-conscious society, having a yoga butt is akin to walking down the street in Louboutins — it's just another thing to tick off the I've-already-got-it list. "Being thin and buff is seen as a statement to the world that you have the time to exercise and are above the temptations of excess calories and hours in front of the TV," she says. It's like that old saying, with a new twist: You can never be too rich or too fit.

The latter can come at a steep price, though. When she's gearing up to compete in a triathlon, Cassidy Vineyard, a Brooklyn-based production coordinator for a fashion company, trains twice a day, swimming in the morning and riding her bike or going for a long run after work. Saturdays and Sundays are often reserved for workouts or races (Vineyard completed two marathons, five half marathons, and two triathlons last year), leaving little time to socialize. "I missed my former roommate's bridal shower," she admits regretfully. "That definitely burned a bridge." Luckily, Vineyard's fiancé is more forgiving. "He's pretty active as well. I don't think we would be getting married if he wasn't so understanding."

Psychological suffering aside, there are physical ramifications as well. "Unfortunately, we live in a more-is-better society, and people get nervous about sustaining their fitness level," says Geralyn Coopersmith, an exercise physiologist and national director of the Equinox Fitness Training Institute. "But if you overtrain and don't leave your body enough time to recover, it's not a matter of if you are going to get injured; it's a matter of when and how badly."

The longer and harder you work out, the more fatigued you become, which can likely compromise form, explains Dr. Carrie McCulloch, who cofounded Kinected, a Pilates studio in Manhattan. "So you're not getting the most out of your workouts." McCulloch also cites tendonitis and bursitis as two injuries commonly seen among people who have pushed themselves too far.

In addition to injury, overtraining can also lead to adrenal and metabolic burnout, even infection, warns Harley Pasternak, a Los Angeles — based trainer who counts Jennifer Hudson and Milla Jovovich as clients. (During vigorous exercise, the body releases stress-related hormones that tax the immune system.) What's more, working the same muscle groups too soon after strength training can impede potential results. "The majority of your muscles need 36 to 48 hours to repair," says Jim Karas, a Chicago-based weight-loss expert and author of The Petite Advantage Diet. Good old-fashioned cardio workouts (like hitting the elliptical) don't require the same amount of rest between sessions, but many experts recommend alternating between hard and easy days, and high-impact and low-impact activities. "Work out smarter, not longer," adds Pasternak.

Besides the futility of the behavior, consider the possible long-term jeopardy. A study recently published in the European Heart Journal suggests that excessive exercise may cause permanent damage to the heart, based on the finding that five of the 40 elite athletes participating in the study sustained scarring on their right ventricle a week after competing in high-intensity sports. "Further study is necessary to clarify the link between arrhythmias and constant extreme workouts," says Dr. Gordon Blackburn, an exercise physiologist and the program director of cardiac rehabilitation at the Cleveland Clinic. Blackburn adds that the average person need only expend 2,000 calories a week — roughly the equivalent of jogging three miles, five days a week — to optimize the cardiovascular benefits of exercise.

There are, of course, exceptions to every rule. David Kirsch, the celebrity trainer responsible for whittling Heidi Klum's postpartum form, acknowledges that he sometimes prescribes twice-a-day workouts, but only for clients prepping for a show or a movie. But while high-profile figures like Kirsch might stand up to an overzealous client, in today's hypercompetitive boutique workout world, many struggling trainers and owners are loathe to discourage repeat customers.

Still, the time it takes to overexercise ultimately adds up to a pace even type-A's can't always sustain. Stephanie Hirsch, an attractive Manhattan-based artist, used to Spin five times a week at SoulCycle, even signing up for double sessions. Looking back, she insists that some results of the grueling sessions were ultimately positive. "It lowered my stress and increased my energy level," says Hirsch. "I also noticed it in my stomach and arms," she observes. But she does admit that after losing 10 pounds, the routine was too time-consuming, and she scaled back to three or four times a week. "I do feel guilty. I see a difference in my body, which I don't love, but my kids are my top priority, work is second, and things like Spinning sometimes have to fall by the wayside."