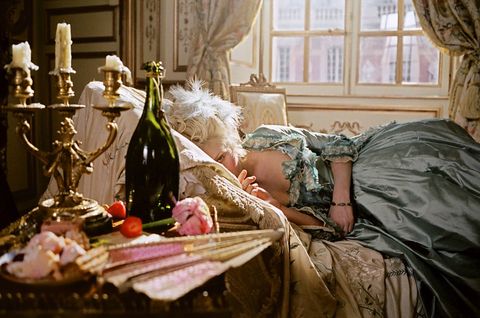 It's early days yet, but if I had to give the period between June 20 and September 5 an official hashtag, it would be #feralsummer16. Reasons: hopping fences at 4 a.m. but still voluntarily waking up five hours later like "HELLO, WORLD;" feeling myself even more than usual because summer giveth (and taketh away) beauty; basically experiencing all the symptoms of spring fever—a very real thing—but more; the vibes are infinite.

Even though this season is like being on biological Adderall, there is still one thing that can really put a damper on your plans to day-drink, then night-drink, then repeat all over again with maybe a Wet Wipe shower and an 180-minute recess in between. That would be your own tiredness.

Emphasizing your lack of energy, at least on social media, is de rigueur these days. How many times have you seen the Chihuahua swaddled in a towel with something like "When your friend cancels but you weren't planning to go anyway" underneath? Here, I would like to remind you that while getting the proper rest is important, crossing it off your list on a timeline different from most people's is the ultimate in chic.

This is how the ideal #feralsummer16 disco nap works: You, in anticipation of staying out late/early enough to run into random olds doing tai chi in the park, head home after happy hour. You sleep—but only for 20-30 minutes, because more just makes you groggy. (Optional: having coffee before, if you're really looking to turn up.) You wake up refreshed and more alert, which subsequently helps you make better choices later, like skipping at high speed down the sidewalk waving dollar slices of pizza.

As an expression of self-care but also selflessness, the disco nap, I dare say, has the full eight hours beat. It's ostensibly for you, but it's also for your friends, like "I'm going to recharge now so I don't flake, or worse, be the first one to peace, starting a domino effect that ends with us all standing around awkwardly waiting for our Ubers." It's being committed to having a good time.

As an expression of self-care but also selflessness, the disco nap has the full eight hours beat

If anything, history remembers are the ones who can hang—late. (Though I suppose rising with the rooster's crow every morning to work on your manuscript counts too. But that's way less fun.)

Chelsea Peng I'm Chelsea Peng, the assistant editor at MarieClaire.com.
This content is created and maintained by a third party, and imported onto this page to help users provide their email addresses. You may be able to find more information about this and similar content at piano.io
Advertisement - Continue Reading Below
More From Health & Fitness
Power Pick: SoulCycle's At-Home Bike
Yes, You Should Be Taking a Probiotic Every Day
Advertisement - Continue Reading Below
The Best Workout Apps for Women Who Want Results
Pilates Mats for Crushing Your Fitness Goals With
Our Favorite Yoga Apps for Beginners
Stress-Relieving Gifts That Will Put You at Ease
How Do We Find Joy Again?
Dr. Fauci's Advice for Keeping Your Immunity Up
How to Build a Mini Gym at Home
Transitioning in the Age of Zoom