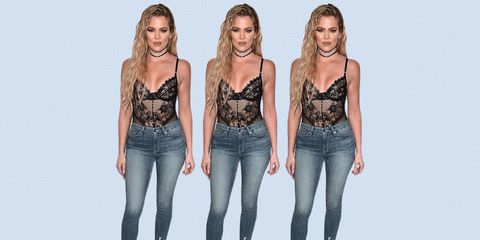 Trust this—behind every celebrity with a killer body, there's a trainer kicking his/her ass. For Khloé Kardashian, said trainer is Gunnar Peterson—and he is all business. I learned as much when I had a personal training session with the man himself, testing out LG's new TONE Active+ headphones with his personal workout playlist (Ja Rule throwbacks, though 😍 ).

While there's no shortcut to a Revenge Body (which premieres tonight on E!), there are ways to make a workout feel more intuitive, accessible, and robust for results you can see quickly. Here are the hacks Peterson helped outline for my fellow lazy girls.

1. Try a jumping rope or jumping jacks. Peterson encourage Khloé to jump rope as it's an entire-body workout. In his book The Workout, he advises that you shouldn't jump more than 2 inches off the ground as it 1) actually burns less calories and 2) puts stress on the knees. Jumping jacks are another great option for strengthening the joints and improving muscle tone all over.

2. Do combination movements. "Combination movements will give you the most bang for you buck," explains Peterson. "I have nothing against tricep kickbacks, but I'd rather have you do a skater's lunge with a kickback and get a lower body workout. Instead of just a lateral raise from the shoulders, think about a side lunge to the lateral raise or a squat, so you're getting more effort out of your body for the movement you're putting in."

3. Stick to a routine. As part of his partnership with LG, Peterson created a workout consisting of ten moves that can be repeated in a circuit for as many rounds as desired. If you don't have access to weights, you can use household items, like water bottles, as substitutes. The idea is that you can do this routine, anytime, anywhere.

"Obviously not after one time, but if you go through these 10 movements two, three, four, or five times, you'll see a difference," he assures. "And it works for any level of fitness because you can add weights, reps, or a number of times through."

Repeat these moves in the following order:

4. Pick the right soundtrack. "Music is everything," says Peterson. "It drives the work. It drives the pace. It keeps you engaged when you would otherwise turn off. The pace and the sequence of the songs is important. When the song is quieter, there's more focus and concentration on the contractions. When the song is upbeat, you're chugging along at a quicker pace."

5. Work out early in the morning. "Try to!" he encourages. "You want less people awake, less people to interrupt it or cut it short. That's just math." Editors' Note: You get it over with for the day, too.

6. Try out a weighted vest. When I told Peterson I'm convinced that running around NYC is a genuine workout, he laughed at me. However, he said it could be if I was wearing a 20-pound vest around town. Whether you're standing or sitting, it can strengthen your muscles and improve your posture while you go about your daily activities.