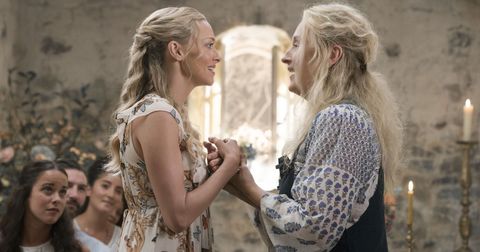 If you've seen the Mamma Mia! sequel, Mamma Mia! Here We Go Again (or even just the trailers for it, TBH), then you know that Meryl Streep's character, Donna Sheridan, has tragically passed away by the time the present-day events of the sequel take place. Donna has a huge presence in the film, thanks to extended flashback sequences in which she's portrayed by Lily James, but there's an unmistakable dearth of Meryl Streep in the movie.

But why? The short answer is that Meryl wasn't available for a full-fledged second round of singing and dancing (the celebrated actress isn't known for doing sequels at all, anyway). She still agreed to be a part of the movie if her role could be reduced and thus the "Donna is dead, but we'll do a bunch of flashbacks" plot was born.

So, how did the creative team decide to kill off Donna Sheridan? And what was it like figuring out what to do with Meryl's one scene on screen? To get to the bottom of it, we spoke with producer Judy Craymer (who also happens to be the woman who convinced ABBA to sign over the rights to their songs for Mamma Mia! the stage musical) and writer/director Ol Parker. Here's what they had to say.

Judy Craymer on Donna's death and Meryl's one song in Here We Go Again:

"[It's a] comedy where you actually experience loss. That's what we've done with the Meryl character. Life is...you know, a bitch.

We could only really move ahead [with the sequel] if we knew that Meryl was going to be part of it because she's so much part of the first film. She doesn't jump up and down at the idea of doing sequels; she's an actress that likes to kind of make new experiences and challenges. For the first one, she's in great sections and all that, And then if she was going to sing [in the sequel], what was it going to be? Because this time around, she's not going to be running and jumping off roofs. So it had to be something [different] and it's an incredibly affecting, key moment."

Ol Parker on deciding to kill off Donna and telling Meryl the news:

"Meryl, she doesn't do sequels and she wanted to be a part of [Mamma Mia! Here We Go Again]. She's incredibly proud of [the first film]—she had a lovely time, all of those things, so she wanted to be in it, but she wanted it to be impactful. And she clearly wasn't going to be in it for the whole movie. So I was the one that said, I think she should be dead. I think you should make a movie about getting over loss, overcoming something, and standing up and becoming yourself, and arising from the ashes of grief.

So we then talked about that with Meryl, who was totally into it and excited by it. So then I went ahead and wrote the script on that basis. And then when we sent it out to everyone, Meryl was already in, which was amazing. So [the rest of the cast] all read it knowing that Meryl has already approved it and was excited to be in it. So people were saying yes immediately. It wasn't forced on me. I was just trying to find the most dramatic and impactful story that I could find to tell."

You can see how a mostly Meryl-less Mamma Mia! plays out for yourself because the sequel, Mamma Mia! Here We Go Again is available in all the standard home viewing formats now.