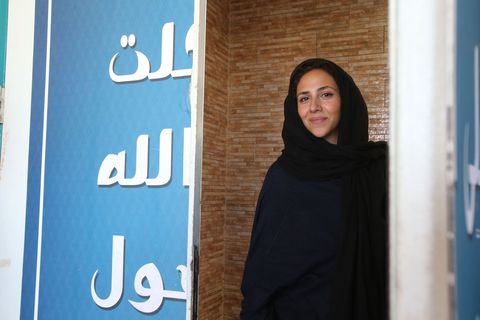 For the first time ever, Saudi Arabia opened its council elections to female voters and candidates—a historic change resulting in at least 19 women winning seats in the country's municipal polls on December 12, AP reports.

130,000 Saudi Arabian women registered to vote in the elections, according to the BBC. And with 284 seats to fill on the kingdom's councils, 978 women (along with 5,938 men) joined the race. Although the number of female candidates was less than a fifth of the number of men who vied for seats, it's a significant amount considering Saudi Arabia is the last nation in the world to open ballots to women.

Female voters cast their ballots for the first time ever in Saudi Arabia.
Getty Images

"For 10 years, I've worked on women's issues and employment, so when this opportunity came along and I had the experience, I thought, why not?" Lama Al-Sulaiman, a candidate in Jeddah, told Al Jazeera. "Women here are doctors and engineers—it's not like women aren't there."

This is only the third time Saudi Arabian citizens have been able to participate in the electoral process. The first two were in 2005 and 2011, when women were still excluded, according to Al Jazeera. That all changed after the election of 2011, when King Abdullah finally granted rights for women to vote and run as candidates.

Rights activist and women's history professor Hatoon al Fassi, the very first woman to register to vote in Saudi Arabia, is grateful she's been able to take part in the country's push for equality.

"This is a historical moment. I thank God I am living it," she told the BBC. "Change is a big word but the election is the way to make sure we are really represented."

This content is created and maintained by a third party, and imported onto this page to help users provide their email addresses. You may be able to find more information about this and similar content at piano.io
Advertisement - Continue Reading Below
More From Politics
How to Help Demand Justice for Breonna Taylor
Your Guide to the 2020 Presidential Debates
Advertisement - Continue Reading Below
Inside Sarah McBride's Historic State Senate Run
You Can Now Wistfully Text Obama "I Miss U"
Amy Coney Barrett Is Poised to Be a SCOTUS Nominee
Sorry, Melania: You'll Never Be Jackie Kennedy
RBG Is the First Woman to Lie In State In Capitol
Where Senators Stand on Replacing RBG in 2020
Jot Down These 2020 Voter Registration Deadlines
In Honor of RBG, Nine Women Reflect on Her Legacy