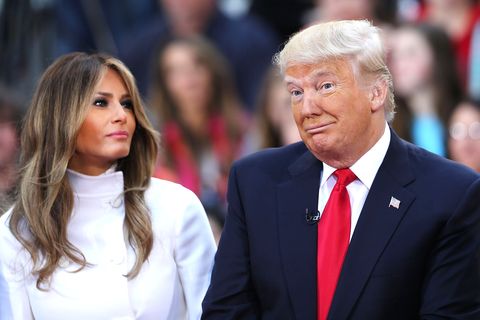 Last night, Stormy Daniels finally went on the record about her alleged affair with Donald Trump. During the interview, which CBS anticipates drew record audiences, the adult film star dropped several bombshells about her alleged relationship with the now-president, including that he told her she reminded him of his daughter and that they didn't use a condom during intercourse.

But during the interview, Anderson Cooper also asked Daniels about Trump's wife, Melania, who at the time of the alleged affair in 2006, had just given birth to her and Trump's son:

Anderson Cooper: Melania Trump had recently given birth to a son, just a few months before. Did that—did he mention his wife or child at all in this?

Stormy Daniels: I asked. And he brushed it aside, said, "Oh yeah, yeah, you know, don't worry about that. We don't even—we have separate rooms and stuff."

The first lady's camp has remained silent about the situation up until now. But last night, Melania's director of communications, Stephanie Grisham, tweeted during the interview.

"While I know the media is enjoying speculation & salacious gossip, Id [sic] like to remind people there’s a minor child who’s name should be kept out of news stories when at all possible," Grisham wrote.

While I know the media is enjoying speculation & salacious gossip, Id like to remind people there’s a minor child who’s name should be kept out of news stories when at all possible.

Many on Twitter agree with Grishman's statement, saying that Trump's 12-year-old son's privacy should be protected—as should Daniels' daughter's, who, the film star revealed during the interview, had been on the receiving end of threats as a result of Daniels' relationship with Trump.

"I was in a parking lot, going to a fitness class with my infant daughter. Taking, you know, the seat's facing backwards in the backseat, diaper bag, you know, gettin' all the stuff out," Daniels told 60 Minutes. "And a guy walked up on me and said to me, 'Leave Trump alone. Forget the story.' And then he leaned around and looked at my daughter and said, 'That's a beautiful little girl. It'd be a shame if something happened to her mom.' And then he was gone."

Related Story
Stormy Daniels' Most Shocking 60 Minutes Moments
This content is created and maintained by a third party, and imported onto this page to help users provide their email addresses. You may be able to find more information about this and similar content at piano.io
Advertisement - Continue Reading Below
More From Politics
A Black Woman Needs to Fill Harris's Senate Seat
Who Is Jen Psaki, Biden's Press Secretary?
Advertisement - Continue Reading Below
Who Will Be in Joe Biden's Cabinet?
Five Women Share Their Stories of Gender Violence
The Global Fight for Black Lives
Michelle Obama on Welcoming the Trumps in 2016
There’s No Such Thing as the “Latino Vote”
Who Is on Joe Biden's Transition Team?
Joe Biden's Youngest Daughter Is An Activist
Joe Biden's Grandkids Are Among His Biggest Fans