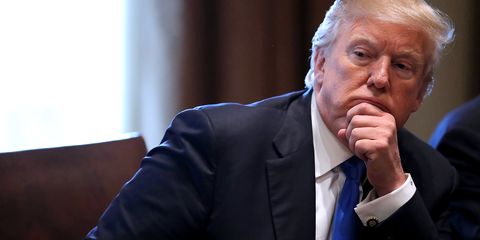 Donald Trump, man who makes the final decisions about health care this country, is reportedly unsure about how HPV and HIV differ and asked Bill Gates to explain it to him. Twice.

MSNBC obtained a clip of Gates speaking at a Bill and Melinda Gates Foundation staff meeting earlier this week. In it, Gates tells the group that he met Trump in December 2016 and again in March 2017, and on both occasions POTUS asked if human immune deficiency virus and human papillomavirus were the same thing.

"Both times he wanted to know if there was a difference between HIV and HPV," Gates says. "So, I was able to explain that those are rarely confused with each other." (For a man who has as much sex as Trump allegedly does, you would think he would have figured this out already...)

First off, Bill Gates is not an M.D., so not sure why Trump chose the entrepreneur and philanthropist as his teacher on this matter. But secondly, in case anyone (Trump are you reading this?) is confused, while both can be transmitted via sexual activity, the similarities stop there. HPV is a sexually transmitted infection that is generally symptomless and harmless, but can result in genital warts or even cancer, depending on the strain contracted. HIV is a virus that is spread through bodily fluids, including blood, and which attacks the immune system. When left untreated, HIV can lead to AIDS.

In related news, today the Trump administration is announcing they are cutting off all federal funding to health clinics that offer abortion services. According to the New York Times, a new rule will "withhold money from any facility or program that promotes abortion or refers patients to a caregiver that will provide one." Sure, Trump is the person who should be making policy decisions about reproductive rights.

Related Story
Everything You Need to Know About HPV
Danielle McNally Danielle McNally is the Deputy Editor of Marie Claire, overseeing features across every topic important to the MC reader: beauty, fashion, politics, culture, career, and women's health.
This content is created and maintained by a third party, and imported onto this page to help users provide their email addresses. You may be able to find more information about this and similar content at piano.io
Advertisement - Continue Reading Below
More From Politics
The Worst Performance Tonight? Chris Wallace
How People Reacted to First Presidential Debate
Advertisement - Continue Reading Below
The Line of the Debate: "Will You Shut Up, Man"
Everything to Know About Joe Biden's Son Hunter
Where Senators Stand on Confirming Judge Barrett
Can We Finally Get Rid of the NRA for Good?
This Is the Democrats' Plan to Defeat COVID-19
This Is How Much Joe Biden Is Worth
A Guide to the 2020 Vice Presidential Debate
What's at Stake if Amy Coney Barrett Is Confirmed