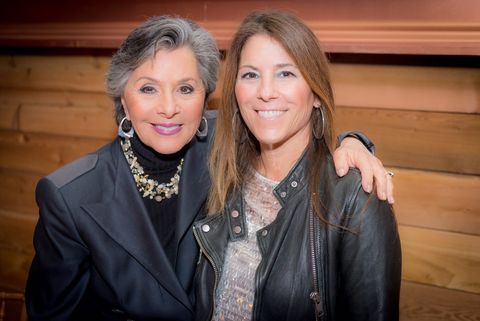 If you're enraged by Trump's latest comments about a female reporter being "obnoxious," by immigrant families being ripped apart at the border, by the utter lack of gun control, the complete hypocrisy of the NFL, or any of the other of a laundry list of ills our country is currently battling, listen up: It's time to fight back. And former Senator Barbara Boxer and her daughter, Nicole, are leading the troops.

Boxer, a member of Congress for more than three decades, hasn't been living a life of leisure since she retired last year. The septuagenarian runs her own PAC and is a regular on the speaking circuit—even an FX drama based on her life is in the works. But that's not enough for this changemaker. Earlier this spring, she got together with Nicole, a documentary filmmaker, to launch a new weekly podcast, "Fight Back with Barbara Boxer and Co-Host Nicole Boxer."

The Boxers in front of the Capitol in the early 1980s.
Courtesy

On the "not scripted" but "heavily prepared" show, the women have a lively discussion about the events of the week, particularly the latest issue or issues women should get fired up about. But they also bring optimism to their listeners, spotlighting a new woman running for office each week and bringing on fascinating thought-leaders and celebrities—including Suze Orman, Senator Barbara Mikulski, and Chelsea Handler—as guests.

If you want to know what's worth knowing about and what you can do about it, add "Fight Back" to your morning commute playlist. You'll get some insight from the mother-daughter duo on what to care about come midterms, and learn how to talk politics at a family gathering without it ending like an episode of Arrested Development.

On why they decided to start a podcast:

Barbara Boxer: "I have to say that Nicole, almost a year before I left the Senate, started to talk to me about doing a podcast. I said, 'I don't see it right now.' I kinda was dismissive of it, and as usual, Nicole, when she has a good idea, she doesn't drop it. Every few months she brought it up. And then, as I've been traveling around the state, people come up and say, 'I miss your voice.' So I said to Nicole, 'Tell me about that podcast again.'

We both felt having us team up would be unique. We don't know of any other mother-daughter political teams. We thought we could offer that. And what I got excited about is the generational difference between us is such a plus because...here's the thing: When I started fighting for equality and justice and the environment and peace in the world, I soon learned that there's nothing guaranteed and every generation has to fight. So there I was with my daughter, who is so articulate and funny and smart, and so I thought, We can have this podcast that can be different than any other podcast in America. And we did it."

Nicole Boxer: "I knew we had a real opportunity to be a positive voice out there in a time where... At the time [we were planning this] we really thought we were going to have a woman president and it would have been a very different show.

Nicole and Barbara in front of the capitol subway, which transports senators from the senate office buildings to the capitol, in 2016.
Courtesy

For me, personally, we had to do this now in light of Trump and then we'd figure out the rest. Because how do you vent your frustration in the world now? How do you make a difference? For me, giving other people the platform and letting them... This idea that this wave of women were gonna be running, I'd love to make a documentary about it. Guess what? That's really expensive and takes a long time and it's really hard logistically, so this is something that's almost fulfilling in that same way.

We're highlighting and diving into these races, people you would never ever hear from that are running and putting themselves out there. To me that's a really beautiful thing."

On the goal of "Fight Back:"

NB: "To me podcast's are about culture. The culture needs to be reminded, when it goes too far in one direction, that we still need progressive social change. We are a family, I grew up in politics, to me it's second nature. To be able to talk about things, to be able to put these other voices out there, for me that's why we're doing this."

BB: "I think it's a chance to invite listeners into a family conversation that touches on almost every single issue that affects them. We bring in some very brave voices. Nicole's piece is to highlight the new fabulous generation that's running for Congress. And what I try to do is find people who are leading thinkers on issues that matter, whether it's foreign policy or health care or equality."

NB: "I feel like there's an opportunity to report back to people about these good things that are happening. I'm just an optimist and I see so many good things. Barbara is more...she's been in the ring, she's been in there fighting in a different way."

On talking politics with your family:

BB: "I can't tell you how many times I give a speech and a young person raises their hand in the back and says, 'Can you help me? I just can't talk to my dad anymore.' The politics has become so poisonous. What we're trying to show is the love is there, so you can work through it. It's not easy.

Barbara and Nicole in the late 1970s.
Courtesy

Don't stop talking to your parents and don't lose your cool. You have to be able to do what I learned to do with some of my opponents in the Senate, and that was to reach over and maybe touch a shoulder and say, 'I totally see where you're coming from, but I need you to be open to what I am saying to you.' And keep it loving and keep it kind. That's not easy, but it can be done.

NB: "If you go to your parents and you say, 'My best friend is gay' or 'I have had this experience' and maybe you don't make it about you, personally, to open the door. This is an experiential society. But the other thing is sometimes—and this may sound harsh—you just have to stay calm and walk away and not try to make the point. Agree to disagree. You just say, 'Why am I knocking my head against the glass? I can be absolutely loving, I can believe what I believe, and I can respect you and go over here.'"

BB: "[Both 2018 and 1992] have been cemented by harassment, abuse, inequality. The Year of the Woman that I ran in was Anita Hill talking about the harassment she received in the workplace by Clarence Thomas. It awakened so many women to tell their stories and it also—and I've said this publicly many times—I never would have ever made it to the Senate without Anita Hill's courage.

The Year of the Woman came about because of underlying societal issues that came to the fore about how women have been treated. These things served as a motivational factor, both to get women to run and get women to vote and get good men who cared about women to also join in (I always remind everybody we cannot do it alone). So I think it's very similar dynamics [today] and the proof will be how many people get out and vote in this mid-term.

Many women who were on the ticket in '92 did not win, but Barbara Boxer didn't listen to people who said she couldn't do it. So I think that's what we're tapping into now. This wave that we're seeing is built on the backs of my mother's generation and we're just a continuation. I've never been so inspired by this millennial generation, by the ones even behind them."

On the issue women should be most concerned about this election cycle:

BB: "The ultimate power, as Barack Obama has said, is the power of citizenship. To be able to vote, to be able to bring about change. We cannot underestimate the push for voter suppression that we're going to see. Both physically trying to suppress the vote—in other words telling people, 'You better have your ID' and frightening them—but also just making people feel it's not worth it. We cannot be suckered into that as women. Every woman has to vote. If every woman voted we would see a sea change.

People often say, 'They're all alike.' That's what I've always heard, 'Why bother?' No two people are alike ever. And certainly a Republican and a Democrat are not alike and you have to decide which side you're on. And that's fine. If you're on the other side, vote, of course."

BB: "They do and they will with great enthusiasm. And so if the rest of us just sit back and watch that, we're going to lose America. Let's put it that way."

NB: "To young women I would say tap into your mother archetype right now, all the things you can care for, and bring our country back to a kinder place. That sounds very George H.W. Bush, but there is something about what women bring to issues across the board, whether it's exposing corruption, whether it's fighting racism, whether it's social justice. That feeling of tapping into your nurturing for the planet, for people, making nice great again."

Download new episodes of "Fight Back with Barbara Boxer and Co-Host Nicole Boxer" every Thursday, available in the iTunes store and via PodcastOne.

Danielle McNally Danielle McNally is the Deputy Editor of Marie Claire, overseeing features across every topic important to the MC reader: beauty, fashion, politics, culture, career, and women's health.
This content is created and maintained by a third party, and imported onto this page to help users provide their email addresses. You may be able to find more information about this and similar content at piano.io
Advertisement - Continue Reading Below
More From Podcasts to Make Your Commute Amazing
The Brand-New Podcasts to Add to Your Queue
The Biden-Harris Ticket Just Got a Podcast
Advertisement - Continue Reading Below
Tara Palmeri on Hosting a Podcast for Survivors
Michelle Obama + Phoebe Robinson = Serotonin Boost
Add These Hot New Podcasts to Your Queue
The Music Podcasts We Keep Pressing Play On
Useful Podcast Episodes About Coronavirus
The Podcasts You'll Actually Learn Something From
Podcasts for When You Need a Really Good Laugh
The 4 Beauty Beauty Podcasts to Download ASAP