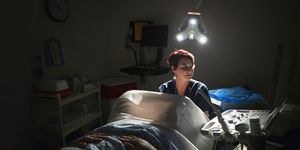 On the Front Lines of the Abortion Wars
Women Are Terrified About the Alabama Abortion Ban
Ineye Komonibo Ineye (in-NAY-yay) Komonibo is the editorial fellow at MarieClaire.com.
This content is created and maintained by a third party, and imported onto this page to help users provide their email addresses. You may be able to find more information about this and similar content at piano.io
Advertisement - Continue Reading Below
More From Politics
A Valedictorian Speaks Out Against Abortion Bans
Standing Between Care and Violence
Advertisement - Continue Reading Below
Seeking Healing a Century After the Tulsa Massacre
What to Know about Texas's Abortion "Trigger Ban"
A New Book Invites Us to Rethink Menstrual Equity
We Must Remember George Floyd's Legacy
This Is How Much Joe Biden Is Worth
Joe Biden's Granddaughter Is His Biggest Fan
Watch Katie Porter Destroy a Big Pharma Exec
SCOTUS Will Hear a Major Abortion Case