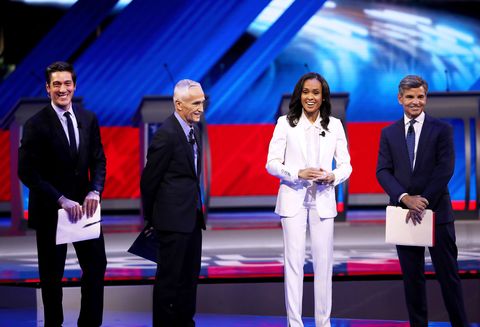 One word you didn’t hear uttered at all on the debate stage at Texas Southern University in Houston? Abortion.

In a three-hour, 10-candidate debate that tackled many of the party’s core issues—some of the most pressing issues facing the country and the planet—there wasn’t a single question about abortion, and none of the candidates brought it up of their own accord. Not even during a 20-minute segment on health care.

As Media Matters noted, despite not saying the word “abortion” (or even its politically palatable euphemisms, “women’s health care” or “reproductive choice”), the candidates did manage to mention The Day After Tomorrow, Canadian Prime Minister Justin Trudeau’s hair, and “17th century philosopher Søren Kierkegaard.” Also, penguins.

It was a particularly jarring omission given that, in the last few years, Texas has been central to the abortion access fight. The most important recent Supreme Court ruling on abortion rights, Whole Women’s Health v Hellerstedt, originated in Texas, where statehouse Republicans designed a raft of onerous regulations that forced the closure of more than half the state’s abortion clinics. The Supreme Court decided that those closures put an undue burden on people seeking abortions, but of course, Texas is just one of dozens of states that have tried—and are still trying—to regulate abortion out of existence and make the protections guaranteed by Roe v Wade meaningless.

Abortion rights advocates were quick to notice the lack of questions from ABC’s panel of four moderators, and many live-tweeted the debate using the hashtag #AskAboutAbortion. But no one did.

States are passing abortion bans, conservatives are claiming women never need abortions to save their lives and that ectopic pregnancies can be "re-implanted."

So I really need someone to ask about abortion tonight. #DemDebate

......no really, no one, not one single person talked or was asked about abortion access or their vision for reproductive freedom tonight. An incredible missed opportunity. #DemDebate #AskAboutAbortion

The candidates noticed, too—or, at least, their digital teams did. After the debate, and on Friday morning, they called out of the lack of abortion questions, and some reiterated their support for reproductive rights.

Three hours, not one question on abortion—with women's rights under attack across our country.

Reproductive rights are under attack across our nation and it should have been discussed last night. pic.twitter.com/rDOyXZxJAg

Since it didn’t come up in tonight’s #DemDebate, at this moment when women’s reproductive freedom is under attack, I wanted to say I trust women to make their own decisions about their health. It’s important we all keep taking about it.

But here’s the thing: In addition to the lengthy discussion about health care, there were plenty of opportunities to make sure abortion, and reproductive rights more generally, were part of the conversation. Abortion is a racial justice issue. It’s an economic issue. It’s a Civil Rights issue. People who risk their lives every day to provide abortions will tell you it sure as hell is a gun control issue. It’s an immigration issue. If, like Joe Biden, you’re going to tell a live TV audience that the most important thing in life is family, you better be ready, willing, and able to talk about family planning.

Renee Bracey Sherman, a reproductive justice activist who created the hashtag #AskAboutAbortion during the 2016 primaries, called on the networks hosting debates to do better, and urged candidates to use their platforms, and not just after the fact.

Not only do I want the next #DemDebate moderators to #AskAboutAbortion, but I’d love to hear a candidate declare “Everyone loves someone who had an abortion.”

Change the conversation. Refuse the stigma. Use your platform to voice compassion for those of us who’ve had abortions.

The dire state of women’s health care did get a few mentions. Senator Cory Booker noted that veterans often see long wait times for gynecological appointments at the VA. Beto O’Rourke condemned the maternal mortality crisis, in which Black women die at three times the rate of white women, and Amy Klobuchar told a compelling story about experiencing inadequate maternal care and then going on to change policy so that “this could never happen to any other mom again.”

I closed the third #DemDebate with my story, and the challenges that taught me the value of public service. pic.twitter.com/5bi2y41iyU

Abortion rights, along with the rest of reproductive health care, have been under sustained attack for a decade, and as President Trump stacks the federal judiciary and the Supreme Court with anti-choice justices, those rights are becoming harder and harder to protect. From Alabama to Utah, Republicans are writing and passing bills designed to restrict abortion access in their states and—if they can pull off a Supreme Court challenge to Roe—in large swathes of the country. The entire state of Missouri has one abortion clinic left, and Republicans there, in addition to passing an 8-week abortion ban, are trying to shut that clinic down.

It is beyond time for moderators to make a practice of talking about abortion. And if they don’t, the candidates should do it for them.

Related Stories
Cory Booker Gets Real About Reproductive Justice
Elizabeth Warren's Plan to Eliminate Gun Violence
Chloe Angyal Chloe Angyal is a journalist who lives in Iowa; she is the former Deputy Opinion Editor at HuffPost and a former Senior Editor at Feministing.
Advertisement - Continue Reading Below
More From Countdown to the 2020 Presidential Election
Jot Down These 2020 Voter Registration Deadlines
Women Are Not Granted Equality in the Constitution
Advertisement - Continue Reading Below
Everybody Running for President In 2020
Michelle Williams Pleads for Women to Vote in 2020
Cory Booker, Rosario Dawson Are Traveling Together
Door Knocking With Field Organizers in Iowa
NARAL Board Chair Quits to Run for Congress
AOC & Bernie: The First Couple America Needs?
"Mayor Pete"s Husband Would Be a "First Gentleman"
Kamala Harris Is Married to Her Number One Fan