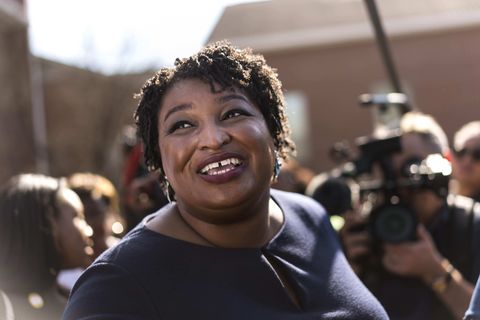 Stacey Abrams is one of the most prominent political voices of our generation. Although she lost the 2018 Georgia gubernatorial election to Republican Brian Kemp, Abrams (the first Black female major-party gubernatorial nominee in the United States) has changed and shaped the course of history in country.

The race and its outcome sparked a nation-wide conversation around voter suppression. To recap: At the time, Kemp was Georgia's secretary of state and therefore in charge of elections and voter registration. Between 2012 and 2016, his office removed more than one million voters in a voter purge. The Associated Press reported in October 2018 that 53,000 voter registrations (70 percent of whom were Black people) were put on hold by Kemp's office. Abrams lost the election by 54,723 votes—a 1.4 percent margin. Had all citizens of Georgia had equal access to vote, the result could have gone the other way.

Since the headline-making race, Abrams has become known as a crusader for voting rights, founding Fair Fight, an organization committed to ending voter suppression. She was on Joe Biden's shortlist for vice president. In her latest move, she's producing a documentary on the history of voter suppression in the United Sates entitled All In: The Fight for Democracy (opening in select theaters September 9th; available on Amazon Prime Video September 18th). Marie Claire spoke with Abrams about her history of leading this fight, mail-in voting, the voter suppression occurring not-so-secretly right now, and what keeps her hopeful for the future of our country. (Ask us the answer to that question, and we'd say: "Her.")

Marie Claire: You've been fighting against voter suppression tactics for years. What does it mean to you to be putting out All In as we approach an unprecedented election year?

Stacey Abrams: It is, to me, a continuation of the story I was raised to tell, which is that our right to vote is essential to our nature as citizens and that it's the obligation of every American to defend not only your own right to vote, but the rights of those around you. Even those with whom you don't agree.

MC: As expressed in the documentary, voter suppression has existed for centuries in this country in various forms: Poll taxes, literacy tests, and more. This election introduces a variety of new COVID-19-related challenges. The discussion around mail-in voting has never been louder and, to many, more confusing. What do you consider the biggest threats to voting right now?

SA: I would say two things, and they're equally important. Voter suppression exists when you're either prevented from voting or discouraged from voting by those who are responsible for your access. Political parties are always going to try to get you to vote for their guy. When they try to block you from voting itself, that's suppression. The prevention piece is what we're watching in the midst of COVID-19. It's not simply the slight-of-hand that is the USPS situation; it's the fact that we have dozens of states trying their best to eliminate or limit who has access to vote by mail, knowing that in a pandemic, the act of going out to cast your ballot puts lives at risk. It is the attempt to prevent people from using the full array of options to cast their ballot. At the exact same time, it is the aggressive misinformation and the mendacity of the President of the United States, who is lying to America because he's afraid of losing an election. It's so egregious that his own party, for example, in Wisconsin, they are running an ad to counter the misinformation about voting-by-mail.

This isn't a partisan issue. This is an American issue. The film intentionally interviewed people from all parts of the political spectrum because, [though] the dangers may target a certain community, they risk harming us all. If you prevent a community from using vote- by-mail—even if it's designed to stop people you don't want to have votes from voting—you're stymying your own people who may want to use it. And, if you give bad information about the process, the whispers are overheard by others, and they also believe it to be true. That's why this is such a dangerous moment.

It is the aggressive misinformation and the mendacity of the President of the United States, who is lying to America because he's afraid of losing an election.

MC: What do you say in response to the idea that mail-in voting might lead to voter fraud?

SA: One, the evidence belies the argument, and there are two evidentiary pieces: If you use the Heritage Foundation, the most conservative organization that tracks this information...if you include all of the forms of voter fraud, they can barely muster 1,300 examples of possible fraud out of 625 million votes cast over 20 years. That absolutely dispels even the most aggressive notion that there could be a problem. But then you will get states, like Oregon and Hawaii, who have been [voting by mail], in Oregon’s [case] for 20 years. There is infinitesimal evidence of even an attempt at that action, but what's even more important is that when people attempt it, they get caught. The rules we've had for 40 years work. We do not need new rules to further siphon off the non-existent disease. That is like undergoing chemotherapy for a headache, and it's not a challenge we have in the United States.

MC: You had to fight against the person who controlled the system in 2018. What parallels can you draw from that situation to this current presidential election?

SA: First and foremost, that those who are constitutionally obliged to protect our rights have proven themselves more interested in protecting their power. Two, that lying and misleading fellow citizens has proven to be their preferred methodology of winning. Three, that there is an intentional effort to undermine both access to and efficacy of our elections. That more than anything should terrify everyone, because voting is a human rights issue. It's not partisan. The elections are non-partisan. The process itself should work the same no matter who you are, no matter what you intend to do. There is no other contest or competition that has the vagaries of rules that you have in voting.

If you play in a sport, the rules of that sport don't change when you travel from city to city or state to state. Regulation size, regulation ball, regulation uniform. Voting is the only operation, the only contest, where the rules change from state to state, from city to city. And the parallel is that in places where you have people who are [afraid] of losing their power, they are willing to manipulate the system to hold on rather than improve their behavior and their performance.

MC: What can our readers do to fight voter suppression tactics?

SA: Number one, make a plan to vote and make sure you plan on how you can vote. Think through all of it: Plan how you can vote by mail, plan how you can vote early, if that's permissible, and plan how you will vote on election day. Once you've made your plan, make certain everyone you know makes a plan, too. Make them share their plan. We have to treat this like not just a campaign, but as an act of war to protect our democracy. We need people to start plotting. Plotting how you're going to vote [is the] number one [thing] to do. [People can] go to vote.org to find out what all the rules are, no matter where they live.

And number three, help us fight voter suppression by signing up at fairfight.com. We've mapped more than 50,000 volunteers and we are going to need them across the country. [The GOP had enlisted] 50,000 people [to] intimidate voters at the polls during election day.

Those are the three. Make a plan, be an election worker, and fight voter suppression.

MC: If elected, what do you hope Biden & Harris do in their first 100 days in office?

SA: Democracy has to be preserved, and that means we have to expand access to include everyone who is eligible. That means having Congress, both the House and the Senate, and we need both, we need to pass H.R.1 and H.R.4. H.R.1 [the For The People Act of 2019]—which is the democracy bills that will create automatic registration, same day registration—it will make certain that we have all of the infrastructure we need for everyone in America, no matter where you live, to have access have access to the same democracy. We need H.R.4, which is the John Lewis Voting Rights Advancement Act, which restores the VRA [Voting Rights Act of 1965]. And then we need to make D.C. a state, and give Puerto Rico self determination, as well as all of the other territories.

If we do those three things, you've done the work of actually expanding access to democracy in our country, but this is not just an act for the President. This is all hands on deck. We need Congress to act. We're going to need state legislatures that then do the work they need to do [for] implementation, because under our constitution, anything the federal government determines necessary for the administration of elections is deployed to the states to actually accomplish. We need to think about the next 100 years of American democracy, and that means it's all hands on deck, from top to bottom.

MC: What makes you feel hopeful about the future of the American political system, and the safety, security, and rights of our citizens?

I [also] just want to say that I think it's so important and it means so much that Liz Garbus and Lisa Cortés [the two filmmakers behind the documentary] made the film, and also that Amazon has been committed not simply to the distribution of All In, but to a social impact campaign. Because this is not a partisan issue. My story may be [part of this], but what is so important to me is that we need to understand that when you break the machinery of democracy, you break it for everyone, regardless of their party. The willingness of Amazon to step up and say this isn't just about telling a story, it's about finding solutions that cut across parties and cut across regions. That's what makes us American. That's who we are when we are willing to do things that may not guarantee us a victory, but guarantees sustainability of our democracy. That's why I'm so excited about the film.

Related Stories
Does Your State Allow Vote by Mail? Find Out Here
The Swing States We Need to Pay Attention to Now
Megan DiTrolio Associate Editor Megan DiTrolio is the associate editor at Marie Claire where she covers books, culture, fashion and career.
This content is created and maintained by a third party, and imported onto this page to help users provide their email addresses. You may be able to find more information about this and similar content at piano.io
Advertisement - Continue Reading Below
More From Politics
Trump Nominates Amy Coney Barrett to Supreme Court
Cecile Richards on Mobilizing Women to Vote
Advertisement - Continue Reading Below
Amy Coney Barrett Is Poised to Be a SCOTUS Nominee
The Best Way to Honor RBG Is With Your Vote
In Maine, Sara Gideon Could Help Flip the Senate
Flight and Fight
How to Help Demand Justice for Breonna Taylor
Your Guide to the 2020 Presidential Debates
Inside Sarah McBride's Historic State Senate Run
You Can Now Wistfully Text Obama "I Miss U"