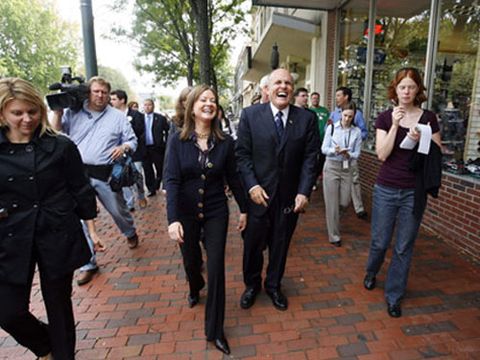 Katie Levinson sits in Andrew's Coffee Shop, two blocks from her office on New York City's busy Fulton Street, nibbling on white melba toast and gearing up for the afternoon ahead. As communications director for Rudy Giuliani's presidential campaign, she has to be prepared for anything.

Levinson, 32, has a professional and personal stake in getting Giuliani elected. She was on Capitol Hill the day of the terrorist attacks; after the jet flew into the Pentagon, just four miles from her office, she remembers driving home and seeing "guys with machine guns on every corner." She believes Giuliani is the right man for the job and that he'll "keep us safe."

To that end, Levinson is working long hours on his behalf. Each day, she leaves her one-bedroom apartment at dawn, stops at Dunkin' Donuts for coffee ("half-decaf, half-caf — black"), and plows through a 2-inch stack of newspaper clippings at the office. She attends a 7:30 a.m. staff meeting, fields reporters' calls, and receives hundreds of e-mails by the hour. "Three in the afternoon is generally when something pops," she says. That often means an attack from an opponent. It's part of Levinson's job to fire back at presidential hopefuls, like Joe Biden ("I, Katie Levinson, have a better chance of becoming president than he does") and John Edwards ("You almost have to feel sorry for the guy") when they criticize her candidate.

She's used to the fray. She was raised with two older brothers in Connecticut; their father, who worked on Wall Street, "would scream at the TV and fax the White House" if he was unhappy about politics. Later, she earned a master's degree from the London School of Economics, and eventually went on to serve as communications director for Governor Arnold Schwarzenegger's campaign.

For Levinson, the idea that female voters have special concerns, different from men's, is "curious," she says. "One of the things that's appealing about Mr. Giuliani is that he has the exact same conversation if he's sitting in front of a group of women as he would have in front of a group of men." He is "a genuine guy," she continues, noting that he doesn't act one way in public and another in private.

Giuliani speaks plainly, "from the gut," she says, adding that she has a very clear idea of what he believes in. "There's not a lot of gray." Some people say that style might backfire when it comes to foreign policy. But it works for the campaign. "Black and white is a lot easier to communicate," Levinson says. In other words, Giuliani is a communications director's dream — at least according to the woman who has the job.

This content is created and maintained by a third party, and imported onto this page to help users provide their email addresses. You may be able to find more information about this and similar content at piano.io
Advertisement - Continue Reading Below
More From Politics
All About Ruth Bader Ginsburg's Posthumous Book
A Guide to Celebrity Presidential Endorsements
Advertisement - Continue Reading Below
Who Is Moderating the Third Presidential Debate?
All of Joe Biden's Homes
What's at Stake for Police Reform in November
Marie Claire's Guide to the 2020 Election
Joe Biden's Town Hall Was a Whole New Level of Zen
Savannah Guthrie Went Head-to-Head With Trump
Your Guide to the 2020 Presidential Debates
What's at Stake for Healthcare in November