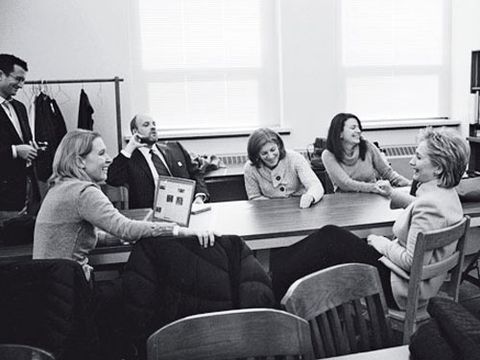 Santiago Solis, a Mexican immigrant with a third-grade education, worked as a janitor in Chicago to provide for his children. When his daughter, Patti, was accepted at Northwestern University, it was one of the proudest days of his life. Now, Patti Solis Doyle is Hillary Clinton's campaign manager — the first Latina to run a presidential campaign.

With her dark hair, dancer's posture, and Prada heels, Solis Doyle arrives at her office in Arlington, VA, looking stunning — but also a little worn out. No matter the day, it promises to be a tough one. Although Clinton has all the things female voters gravitate toward — a concern for the problems of working families and a background in health-care policy and education — she's not an easy sell.

"We have this running joke," Solis Doyle has said. "Hillary calls me up and says, 'What do people think of me?' I reply, 'They think you're the devil, a little bit.'"

Clinton is an intensely private woman and understandably press-shy, given the grueling scrutiny of her marriage, her business dealings, and her hairstyles in the past. Part of Solis Doyle's job is to humanize Clinton and make her accessible to voters.

In light of that, Solis Doyle, 42, works with an army of media strategists, fund-raisers, and political advisers; in meetings at campaign headquarters, she and staff members argue over strategy. "In the end, you have to make a decision," Solis Doyle says. "So when consensus cannot be reached, I'm the one who has to say, 'OK, we've heard all sides. Here's what we're going to do.'"

Solis Doyle is a powerful figure in the campaign and has earned a fearsome reputation. She has been called a "control freak" (Chicago Tribune), "brutally competitive" (Fox News Network), and a "chief enforcer" (New York magazine). "I have to make the call," Solis Doyle says. "Sometimes I am not very popular because of that."

Popular or not, Solis Doyle has helped Clinton raise $90 million and become a leader in the race. Such success, say experts, can be attributed in part to a regimented approach, with an emphasis on loyalty that can be traced back to the early days of Bill Clinton's bid for the presidency — the time when Solis Doyle first joined Team Clinton.

Fueling Solis Doyle's drive is her deep friendship with her boss. "When my children were born, Hillary came to visit them in the hospital. When my father passed away, she called my mom at the hospital," she says. "I would take a bullet for her."

This content is created and maintained by a third party, and imported onto this page to help users provide their email addresses. You may be able to find more information about this and similar content at piano.io
Advertisement - Continue Reading Below
More From Politics
Twitter Has Thoughts On the Presidential Debate
Can You Vote Online in the 2020 Election?
Advertisement - Continue Reading Below
What's at Stake for Abortion in the 2020 Election
Just 25 Celebrities Doing Their Civic Duty
Donald Trump's Twitter Was Hacked
Kristen Welker Is Moderating the Third Debate
The Swing States We Need to Pay Attention to Now
Your Guide to the 2020 Presidential Debates
When Will We Know Who Won the Election?
This Is How Much Joe Biden Is Worth