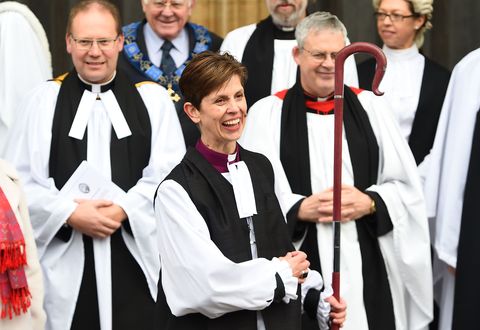 Libby Lane just broke one giant glass ceiling—the 48-year-old reverend has become the first female bishop in the history of the Church of England.

She was officially ordained as the Bishop of Stockport on Monday in front of more than 1,000 people, the BBC reports. Fellow bishops laid hands on her and prayed during the emotional ceremony, and she was greeted to thunderous applause.

Not everyone was happy about the move, though: Reverend Paul Williamson interrupted the ceremony by shouting "No, not in the Bible!" when the Archbishop of York asked the room if she should be ordained. "He's got the right to protest," a church spokesman said, "but the contrast was between a lone voice protesting and a sea of voices affirming." Roman Catholic bishops, who frequently attend these Anglican ceremonies, were also noticeably absent, The Guardian notes.

Bishop Lane was not raised in a religious household, but found her way into a church group after a friend invited her, according to The Telegraph. She knew she wanted to be a priest by the time she was in her teens, even though it wasn't allowed at the time. She studied theology at Oxford, and she became one of the first women to train for the priesthood in British history after it was opened to women in 1992.

She met her future husband, George, while they were at Oxford, and they were ordained as priests together in 1994. After having two kids, she left the workforce for a few years, but then quickly ascended the ranks once she went back to work.

Lane represents a church that's finally modernizing since its inception in 1534. And not only does she signify a sea change about gender, but also one about pop culture in general—her sermon revolved around the BBC series Call the Midwife.