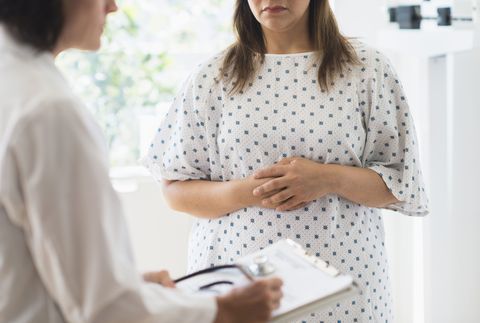 Imagine you find out you're pregnant. You're not ready to have a baby. You make a difficult decision and book an appointment to end the pregnancy. You set money aside, and take time off to go to the clinic. And then when you get there, your doctor tells you your abortion is reversible.

Actually, that last part isn't imagination—at least not for women in Arizona. On Monday, a controversial law passed in the state requires doctors who perform drug-induced abortions to inform women that the procedure may be reversible, despite the fact that most doctors say this is medically incorrect. Largely based on the research of Dr. George Delgado, a physician who claims he was able to save pregnancies before the second pill in a drug-induced abortion was taken, this new legislation is part of a broader law meant to keep insurance purchased from the federal health care exchange from covering abortions.

Arizona is already a hostile place for women's reproductive rights: Women have to receive state-directed counseling, including information meant to dissuade them from terminating, before having an abortion, and must wait a day before going through with the procedure. Health care plans under ObamaCare only cover the cost of an abortion if the woman's life is in danger, or if she is a victim of incest or rape. Ninety-seven percent of the state's counties don't have an abortion clinic, and yet measures to keep doctors from remotely administering a drug-induced abortion via telemedicine are linedup at the ready.

Sadly, none of this is an April Fools' joke. The slippery slope of women losing their reproductive freedoms is dangerous and real—and it's not even a little bit funny.

A Look at Where Abortion Politics Stand Now

Why I've Decided I'm Not Having Kids

Elizabeth Kiefer Elizabeth Kiefer is a features editor at Cosmopolitan, where she focuses on enterprise stories, narrative reporting, and cultural coverage for the magazine's print and digital platforms.
Advertisement - Continue Reading Below
More From Politics
Everything We Know About Senator Warren's Husband
Mayor Pete's Husband Would Be a "First Gentleman"
Advertisement - Continue Reading Below
How a Parkland Mom Turned Her Grief into Action
He Voted for Trump. She Voted for Bernie.
How Guerrilla Feminists Are Fighting Femicide
Who Was Mayor Pete's Father, Joseph Buttigieg?
Nancy Pelosi, Icon, Ripped Up Trump's SOTU Address
Thoughts From a First-Time Caucus-Goer
And Now, a Word From the Future Voters of Iowa
Ayanna Pressley Wants Total Justice for Survivors