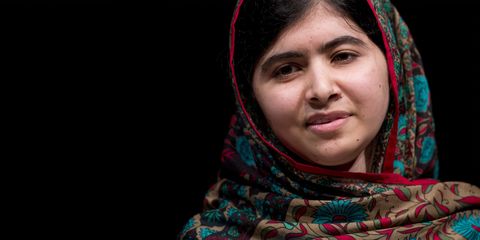 Update, 6/5: No justice? Eight of Malala's hitmen have been secretly freed, reports The Daily Mirror. Turns out, the "sentence" was a sham for these eight, who were quietly tried and not convicted. Only two of the men accused are serving the 25 years they were sentenced.

According to the Mirror, a senior security source says that officials lied about the trial and convictions and released the eight quietly to "avoid a media fuss."

Original story, 4/30: On Thursday, a court in Pakistan sentenced 10 men to life in prison for the 2012 attack of education activist Malala Yousafzai, the BBC reports. A life sentence in Pakistan is 25 years.

Malala was only 15 when a group of men believed to be part of the Tehreek-e-Taliban Pakistan militant group shot her in the head as she boarded a school bus in the Swat valley. Two of her schoolmates were also injured in the attack.

Despite being in critical condition, Malala made a full recovery and was awarded the 2014 Nobel Peace Prize for her ongoing efforts to promote educational rights for women all over the world. She now lives in Birmingham, England with her family.

We're glad to see some justice served in the world, albeit long overdue.