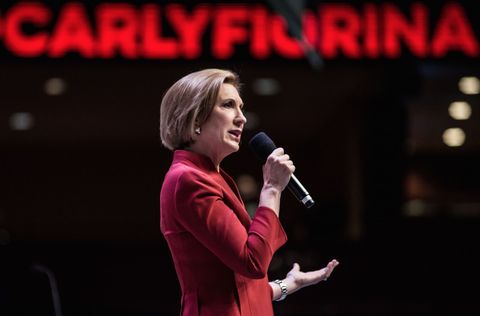 In the wake of Carly Fiorina's strong debate performance on Wednesday, journalists and pundits alike are speculating that the former HP CEO could finally help the Republican Party, which hasn't captured a majority of the female electorate since 1988, win over women. "She took a big stride toward filling a role her party badly needs: a credible antidote to the gender gap and the Democrats' claims of a Republican 'war on women,'" the New York Times asserted Thursday of the GOP's only female contender in a field of 16 presidential candidates.

But there's a problem. These claims fail to recognize the fact that yes, Fiorina may have been wearing a skirt on the debate stage—but otherwise, she's not any different from the dudes wearing pants.

Fiorina may have been wearing a skirt on the debate stage—but otherwise, she's not any different from the dudes wearing pants.

Her policy positions on issues of importance to women are the same as her rivals': She supports the current Republican effort in Congress to ban most abortions after 20 weeks, and Fiorina has said she "absolutely would vote to overturn Roe v. Wade if the opportunity presented itself." She has vowed to eliminate funding for Planned Parenthood if elected, which would deny vital health care to millions of women. (She also made a false allegation against Planned Parenthood during the debate.) Her fiercely pro-life stance won't help the GOP make inroads with female voters—according to Gallup, a majority of American women now define themselves as "pro-choice."

Fiorina also opposes many policies designed to improve the lives of working women. She is against raising the minimum wage, even though nearly two-thirds of minimum wage earners are women and 80 percent of women support raising the minimum wage. She dismissed the Paycheck Fairness Act as something that "wouldn't help women advance"—a puzzling claim, since the law, if passed, could dramatically narrow the gender pay gap by making it easier for women to discover and challenge pay discrepancies. She has also said the U.S. should remain the only developed country without mandatory paid maternity leave.

Further, Fiorina thinks feminism is a "left-leaning political ideology" that positions "women against men." And in last Wednesday's debate, she said booting Alexander Hamilton off the $10 bill in favor of a woman was nothing more than a "gesture." In doing so, she failed to recognize that many women are excited about the prospect of putting a woman on paper money—rather than relegating trailblazers like Sacagawea and Susan B. Anthony to barely-used dollar coins—because doing so would be a visible acknowledgment by the government of women's history and contributions to the nation.

Fiorina thinks feminism is a "left-leaning political ideology" that positions "women against men."

It's insulting to suggest that women will be *so* bowled over by the fact that Fiorina has a vagina that they'll be more likely to vote for her than male Republicans with the same exact platform. It's also worth noting that she won only 39 percent of women voters in her 2010 California Senate race.

And as for the proposal that if Fiorina doesn't win her party's nomination, the GOP can woo women voters by putting her in the vice-presidential slot? Just ask Senator John McCain how that worked out in 2008.

Kayla Webley Adler Deputy Editor Kayla Webley Adler is the Deputy Editor of ELLE magazine.
This content is created and maintained by a third party, and imported onto this page to help users provide their email addresses. You may be able to find more information about this and similar content at piano.io
Advertisement - Continue Reading Below
More From Politics
What Is Mutual Aid? For One, Not a Trend
How to Help Texans During the Winter Storm Crisis
Advertisement - Continue Reading Below
Hate Crimes Against Asian Americans Are Rising
Anti-Trans Bills Are in the Works Across the U.S.
Vanishing Act
The Women Who Took on ISIS—and Won
Yes, Trans People Belong in Sports
I’m a Parkland Survivor. Rep Greene Must Resign
Why Indian Farmers Have Been Protesting for Months
AOC Opens Up About Her Trauma