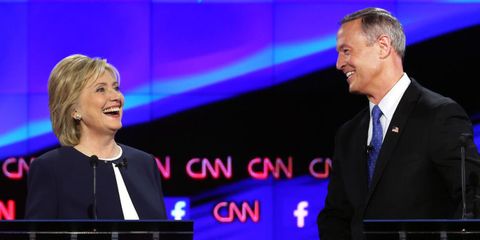 Last night's first Democratic debate was undoubtedly more in-depth and substantive than the two GOP debates—half the number of candidates, minus Trump, equals way more issues covered. But that doesn't mean it didn't have its fair share of funny, bizarre, or straight-up cringeworthy moments (Hillary even made a joke about women taking longer to pee).

1. What exactly went down when Hillary Clinton and Barack Obama "crashed a meeting with the Chinese"?

After teasing this mental image early on, she elaborated later in the debate: "Literally, President Obama and I were hunting for the Chinese, going throughout this huge convention center." One of Hillary's biggest criticisms is that she isn't relatable enough, but really, what's more relatable than crashing a party you're not invited to?

2. What skeletons are hiding in Lincoln Chaffe's closet?

He boasted of the fact that he's "had no scandals" in the 30 years he's been in politics, but come on, Linc. Everyone has something. And just look at the guy. Last night he came across more like a sweet granddad who was just happy to be there than a former mayor, governor, and senator. We're suspicious.

3. How did smoking weed not "quite work" for Bernie Sanders?

Anderson Cooper referenced Bernie's admitted dope dabbling during a question about supporting recreational legalization (for the record, he does). But did the Vermont senator really try it only twice, and "unsuccessfully," whatever that means? He came of age as a war-protesting hippie in the '60s, and his unofficial slogan is "Feel the Bern." Just saying.

4. What happened to Jim Webb in high school to make him so mad about his speaking time?

Though he ended up with a respectable amount of total speaking time, Webb used a lot of it to express his feelings about the fact that the other kids got called on more than him. He brought it up more than five different times, prompting Anderson Cooper to finally snap, "You agreed to these rules and you're wasting time. So if you would finish your answer, we'll move on." And because Webb is polling at less than 1% and is barely campaigning, his griping made him come off more like a kid who was picked last for kickball than a rising star of a politician.

5. What does Martin O'Malley *really* think about the Republican candidates?

Though the Republicans came up frequently as a group target in the debate, individual candidates were hardly mentioned at all—except for when O'Malley called Trump the "carnival barker in the Republican Party." Maybe it's the fact that he's the cute one, or that he said it in that accent you can't place, but O'Malley's passionate Trump jab left us wanting to hear more about what he really thinks—preferably over dimly-lit drinks.

Scarlet Neath Politics Writer Scarlet Neath is a freelance writer covering politics.
This content is created and maintained by a third party, and imported onto this page to help users provide their email addresses. You may be able to find more information about this and similar content at piano.io
Advertisement - Continue Reading Below
More From Politics
Anita Hill Believes We Can End Gender Violence
For Teachers, Going to Work Can Mean Life or Death
Advertisement - Continue Reading Below
Want to Help Moms? Prioritize Menstrual Equity
Abortion Rights Start at the State Level
All of Your Abortion Questions Answered
The Texas Abortion Snitch Site Is Having a Bad Day
The Future of Afghan Women Depends on Us
How You Can Help People in Afghanistan
Andrew Cuomo Has Resigned as NY Governor
Gwen Berry: Athlete, Activist, Olympian