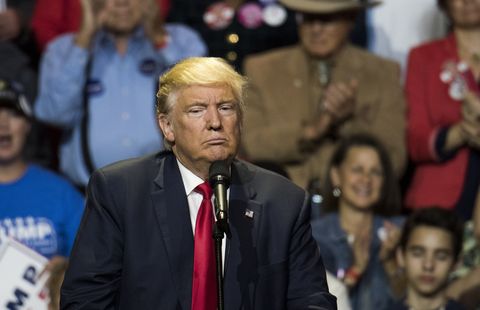 You probably woke up this morning thinking there couldn't *possibly* be more depressing Trump musings to click on, right? Wrong! Much like The Little Engine That Could, Donald Trump refuses to stop making women feel uncomfortable—and his latest unearthed quote is right up there with the best of them. By which we mean worst of them.

During a never-before released 1994 interview with Nancy Collins from ABC's Primetime Live, Trump says "Psychologists will tell you that some women want to be treated with respect. I tell friends who treat their wives magnificently, get treated like crap in return, 'Be rougher and you'll see a different relationship.'"

Literally there are no more words. There is only this gif.

Trump also told Collins about the decline of his marriage to Ivana Trump, saying her interest in his business, as opposed to homemaking, was a turn-off for him:

"I don't want to sound like a chauvinist, but when I come home at night and dinner's not ready I go through the roof. But I got handed casino numbers. After 12 hours dealing with my companies, I didn't want to talk business. I can instantaneously shut it off, my survival mechanism. But she'd be yelling into the phone with the casino; I didn't want my wife shouting like that. Ivana had a great softness that disappeared. She became an executive, not a wife."

Because God forbid women show an interest in business, right?

For more of Trump's fascinating interview head over here. But warning, you'll be greeted with the quote, "I'm a great starmaker, which I've done with Ivana and Marla. I liked that. But once they are a star, the fun is over for me. It's the creation process, like creating a building. It's sad."