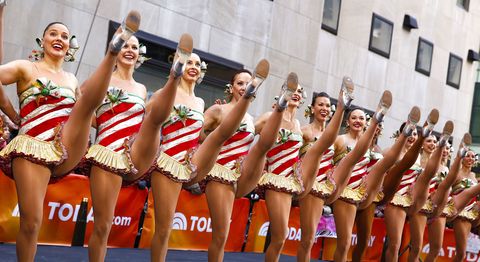 Update 12:39 p.m.: Madison Square Garden Company has now released a statement stating that individual Rockettes are not "obligated" to perform.

"The Radio City Rockettes are proud to participate in the 58th Presidential Inaugural," read the statement. "For a Rockette to be considered for an event, they must voluntarily sign up and are never told they have to perform at a particular event, including the inaugural. It is always their choice. In fact, for the coming inauguration, we had more Rockettes request to participate than we have slots available. We eagerly await the inaugural celebrations."

Original story: President-elect Donald Trump will kick off his first year as president with The New York Radio City Rockettes at the Jan 20 Inauguration, where he will be officially sworn in as president of the United States.

"We are honored that the Rockettes have again been asked to perform in the upcoming inauguration festivities," James L. Dolan, the executive chairman of The Madison Square Garden Company, owner of the Rockettes, told NBC News in a recent statement.

The Rockettes performed in 2001 and 2005, for both inauguration celebrations for George W. Bush.

But not everyone is thrilled to be performing. In a now deleted Instagram post, Rockette Phoebe Pearl expressed her dismay to be performing for the inauguration. "I usually don't use social media to make a political stand but I feel overwhelmed with emotion. Finding out that it has been decided for us that Rockettes will be performing at the Presidential inauguration makes me feel embarrassed and disappointed. The women I work with are intelligent and are full of love and the decision of performing for a man that stands for everything we're against is appalling. I am speaking for just myself but please know that after we found out this news, we have been performing with tears in our eyes and heavy hearts. We will not be forced! #notmypresident" she reportedly wrote, via The Hollywood Reporter. The Rockettes are allegedly obligated to perform per their union rules.

In conjunction with the Rockettes, there is also slated to be a performance by the Mormon Tabernacle Choir. The 360-member singing group made up of all volunteers has officially accepted the invitation to sing at the annual event. This will mark the sixth time that the Mormon Tabernacle Choir has performed at the inaugural event, having sung for presidents such as Lyndon B. Johnson in 1965, Richard M. Nixon in 1969, Ronald Reagan in 1981, and both Bush presidents.

Along with the Rockettes and the Mormon Tabernacle Choir, it was also announced this week that Jackie Evancho, the 16-year-old former America's Got Talent runner-up, will sing the national anthem at the ceremony.