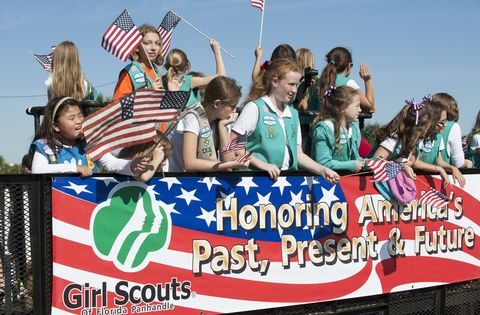 The Girl Scouts of America are defending their decision to have members march in the Inauguration Parade Friday that'll honor president-elect Donald Trump. Though the Girl Scouts have been "appearing at inaugural events throughout their history," according to NBC News, their decision to participate this year has been met with a wave of criticism. Can you guess why? Right, because of Trump's sexist comments and those allegations of sexual assault...which Trump has denied.

If you wouldn't leave a girl scout in a room alone w/ donald trump, you shouldn't be participating in his inauguration, @girlscouts. #resist

Trump is the antithesis of everything Girl Scouts stands for as an organization. He is a predator who does not respect women and girls.

What a horrible message for @girlscouts to send to young girls by supporting Trumps misogyny & bigotry. https://t.co/IcRXeHJjgB

In a statement to NBC News, the group explained the thought process behind their decision to march:

"Of course, we are a nonpartisan nonprofit organization that by law cannot take positions on political candidates or parties—and we take this very seriously. Advocating for change on issues one cares about isn't at odds with participating in a century-long tradition that represents the peaceful exchange of power. Our fundamental value is empowering girls to be leaders in their own lives. By helping them build the courage, confidence, and character to lift their voices, champion their views, and be advocates for the issues and ideas important to them, Girl Scouts supports girls as they become catalysts for change who strengthen their communities."

The 75 members will also attend the Women's March on Washington—which represents a notably progressive platform—the day after the Inauguration Parade. Participation is voluntary, according to the Girl Scouts's official website.

The Girl Scouts controversy comes on the heels of the news that many Rockette dancers feel pressure to perform at Trump's inauguration.

Kate Storey Senior Staff Writer Kate is a writer for Esquire covering culture, politics, style, and lifestyle.
Advertisement - Continue Reading Below
More From Politics
Everything We Know About Senator Warren's Husband
Mayor Pete's Husband Would Be a "First Gentleman"
Advertisement - Continue Reading Below
How a Parkland Mom Turned Her Grief into Action
He Voted for Trump. She Voted for Bernie.
How Guerrilla Feminists Are Fighting Femicide
Who Was Mayor Pete's Father, Joseph Buttigieg?
Nancy Pelosi, Icon, Ripped Up Trump's SOTU Address
Thoughts From a First-Time Caucus-Goer
And Now, a Word From the Future Voters of Iowa
Ayanna Pressley Wants Total Justice for Survivors