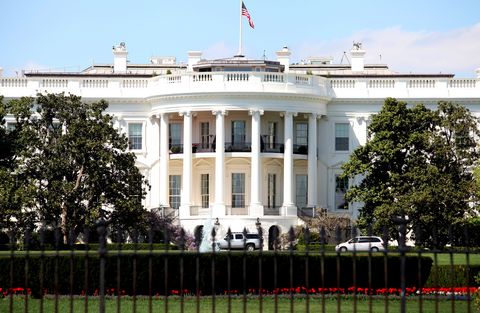 This week marks a huge transition for America. After the inauguration, the Obama family will move out of the White House, and the transition team will have a tight five-hour timeframe to ready the residence for Donald Trump and his family. But once the Trumps are officially the first family, what happens to America's most iconic home? Here's exactly what the Trumps can (and, perhaps more importantly, can't) do to the White House.

They can: Redecorate the living spaces to their taste

The president's living quarters, when the Reagans lived in the White House.
Getty Images

The First Family has the most leeway in redecorating the living quarters, which are located on the top two floors of the 132-room building. They'll be able to repaint the rooms to their liking, as well as pick out their own furniture, wall decorations, and bedding.

Usually, the First Lady has taken the lead on redecorating the family living spaces, so if the Trumps follow tradition, Melania's taste will dictate what the top two floors of the White House look like for the next four years.

While the First Family can fully revamp their living quarters, there are plenty of changes they can't make—at least not without approval from the Committee for the Preservation of the White House. Historic rooms—like the Lincoln Bedroom—and public spaces—like the Green Room and the state dining room—are protected from changes without committee approval. So, while the White House is a home for the First Family, it's also a living museum of American history and so aspects of it can't be changed easily.

They can: Pull from a literal warehouse of furnishings and artwork

When it comes to decorating the White House, the First Family has a lot of gorgeous historical options. A high-security White House storage facility houses furniture and artwork collected by past presidents and the White House Curator.

The collection is expansive, including everything from vintage four-poster beds to works by famous artists like Norman Rockwell and Georgia O'Keeffe, and the First Family will be able to pull from anything in the collection to decorate both the private and public spaces in the White House.

President George W. Bush, for example, chose a painting called A Charge To Keep by W.H.D. Koerner for his Oval Office decor. Bush took the name of his 1999 autobiography from the painting.

They can: Bring in an interior designer

While the First Lady typically helms the redecorating ship, she's welcome to (and usually does) enlist the help of a professional interior designer. The Clintons brought in Little Rock decorator Kaki Hockersmith, the Bush family tapped Fort Worth designer Kenneth Blasingame, and the Obamas hired Hollywood decorator Michael S. Smith for all their redecorating needs.

That said, they still have to get approval. The FLOTUS and her interior designer work closely with a White House curator to ensure that no changes compromise the history of the home.

They can: Use public funds to decorate the White House

Congress allocates funds for redecorating the White House and the budget has been $100,000 per term since Bill Clinton's second term. This means the First Family can use up to $100,000 of taxpayer money to redecorate the space. However, they aren't obligated to use that money.

Groups like the White House Historical Association have privately-raised funds that have been used for White House purchases in the past—like a $74,000 set of china chosen by Laura Bush. But the Obamas made a big statement when they declined to use the allowance or donations.

The Obamas opted to pay for their White House renovations out-of-pocket, something the Trumps could also choose to do. Of course, paying for the decorations out-of-pocket doesn't change the rules about making changes to historic aspects of the home.

They can: Make unique additions

Past presidents have made their own signature additions to the White House. The Kennedys added a swimming pool and Nixon added a bowling alley, for example. Obama had the White House tennis court adapted so it could also be used as a basketball court. While these big changes require approval, the Trumps could conceivably make a big change or two to the White House or its grounds.

The Obamas built a dream playground for Malia and Sasha.
Getty Images

The Obamas also had a playground built for Malia and Sasha, but now that they're moving out of the White House, they've donated it to a D.C. homeless shelter.

Anyone worried that the incoming First Family will come in with a demolition crew and transform the White House into a D.C. version of Trump's New York City penthouse can breathe a little easier. While the First Family can make reversible decorating decisions and even petition for bigger changes and additions, they won't be able to walk in with sledgehammers and a contractor and gut the place.

"They are not going to let Trump in and tear down the walls," Kate Andersen Brower, author of First Women: The Grace and Power of America's Modern First Ladies told ABC News. "Some parts are essentially historic rooms and belong to the American people, not to the families who live there."

They can: Make the changes they've described

In an interview with People, Trump addressed his plans for the iconic house—and it doesn't sound like he plans to try to duplicate the ornate decor of his penthouse.

"If I were elected, I would maybe touch it up a little bit, but the White House is a special place," he said. "You don't want to do too much touching."

Kayleigh Roberts Kayleigh Roberts is the weekend editor at Marie Claire, covering celebrity and entertainment news, from actual royals like Kate Middleton and Meghan Markle to Hollywood royalty, like Katie Holmes and Chrissy Teigen.
This content is created and maintained by a third party, and imported onto this page to help users provide their email addresses. You may be able to find more information about this and similar content at piano.io
Advertisement - Continue Reading Below
More From Politics
Gwen Berry: Athlete, Activist, Olympian
The Anti-Choice Endgame: Power And Control
Advertisement - Continue Reading Below
Give Domestic Workers the Protections They Deserve
Kristin Urquiza Wants Justice for COVID-19 Victims
A Breakdown of VP Harris's Net Worth
WH Announces Removal of the Hyde Amendment
What Liberation Means This Juneteenth
Kathryn Garcia: It's Time to Step Up or Shut Up
A Valedictorian Speaks Out Against Abortion Bans
Standing Between Care and Violence