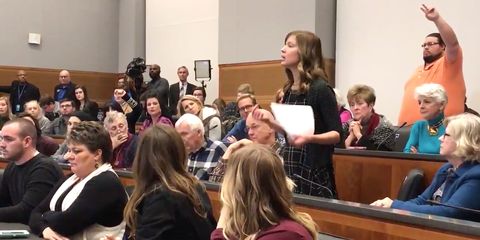 Republicans in Congress are currently coming up with a plan to repeal Obamacare—but many of their constituents are speaking out to make it clear that they are not doing so with full support.

Seriously urge everyone to watch this entire question from a woman at GOP #Obamacare townhall in Tennessee: pic.twitter.com/8mBGE1z6Rj

Republican Rep. Diane Black held a town hall about the Affordable Care Act in Murfreesburo, Tennessee, and several of her constituents gave passionate defenses of the Affordable Care Act and why it's important. CNN reports that one of her constituents, a 35-year-old teacher named Jessi Bohon, was visibly emotional as she gave a powerful defense of why the individual mandate to have health insurance is so important. Here's what she said:

"My name is Jessi Bohon and I'm in your district. It's from my understanding the ACA mandate requires everybody to have insurance because the healthy people pull up the sick people, right? And as a Christian, my whole philosophy on life is pull up the unfortunate. So the individual mandate, that's what it does. The healthy people pull up the sick. If we take those people and put them in high-risk insurance pools, they're costlier and there's less coverage for them. That's the way it's been in the past, and that's the way it will be again. So we are effectively punishing our sickest people. And I want to know why not, instead of fix what's wrong with Obamacare, make companies like Aetna that pulled out and lied to their consumers about why they pulled out, and said they pulled out because Obamacare was too expensive, but they really pulled out because of a merger. Why don't we expand Medicaid and have everybody have insurance?"

Rep. Black responded to Bohon by saying that the individual mandate still allowed many people to be insured. "About 20 million people did actually come into the program who were uninsured," she said. "You don't want to hurt one group of people to help the another. We can help both groups at the same time."

"How many of those people were in states where they played a political game with people's lives?" Bohon retorted. "I'm going to pass this one," Rep. Black replied.

Bohon told CNN that she voted for Hillary Clinton in the presidential election, and said that growing up in a coal-mining town in Virginia taught her why helping the needy was so important. "Growing up in the community that I grew up, in Appalachia, because we were so poor there that we had to take care of each other," she said.