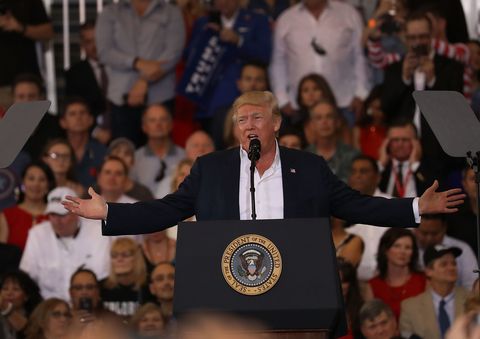 Saturday evening, President Donald Trump visited Florida for a rally with some of his biggest supporters, CNN reports. Although it's been months since Trump needed to rally in the traditional sense (he won the election in November, was confirmed by the Electoral College in December and was sworn in last month), the first few weeks of his presidency have not gone smoothly and The Washington Post described the rally as an attempt at a sort of reset for the administration.

"I am here because I want to be among my friends and among the people," Trump said at the opening of the rally. "This was a great movement, a movement like has never been seen before in our country or before anywhere else, this was a truly great movement and I want to be here with you and I will always be with you."

Trump definitely appeared to be in his comfort zone as he spoke to the crowd in Melbourne, Florida. He was dressed casually, with his top shirt buttons undone and no tie, and hit on points that energize his base—like immigration reform (he said his administration will release a new immigration order soon) and bringing jobs back to the United States.

He also took the opportunity to reiterate his criticisms of the mainstream media, which he's called the "enemy of the American People." He tweeted about the media on Friday and again a few hours before his rally.

"I want to speak to you without the filter of the fake news," Trump said to the crowd at the rally. "The dishonest media, which has published one false story after another with no sources, even though they pretend they have them–they make them up in many cases. They just don't want to report the truth."

He then promised to not let the media "get away with" reporting lies, at which time, CNN reports, the members of the press in attendance stood and booed.

"When the media lies to people, I will never, ever, let them get away with it. I will do whatever I can that they don't get away with it," he said. "They have their own agenda and their agenda is not your agenda."

Kayleigh Roberts Kayleigh Roberts is the weekend editor at Cosmo, focused on celebrity news and royals.
This content is created and maintained by a third party, and imported onto this page to help users provide their email addresses. You may be able to find more information about this and similar content at piano.io
Advertisement - Continue Reading Below
More From Politics
For Teachers, Going to Work Can Mean Life or Death
Want to Help Moms? Prioritize Menstrual Equity
Advertisement - Continue Reading Below
Abortion Rights Start at the State Level
All of Your Abortion Questions Answered
The Texas Abortion Snitch Site Is Having a Bad Day
The Future of Afghan Women Depends on Us
How You Can Help People in Afghanistan
Andrew Cuomo Has Resigned as NY Governor
Gwen Berry: Athlete, Activist, Olympian
The Anti-Choice Endgame: Power And Control