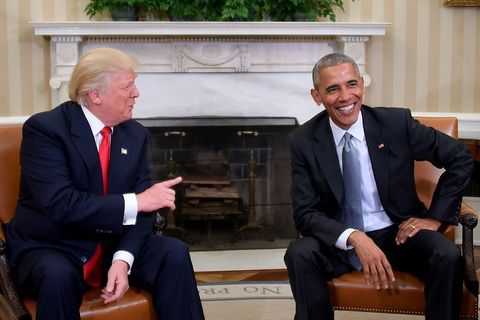 Mapping Donald Trump's feelings about Barack Obama is a wild ride. First, Trump famously spent years trying to undermine the legitimacy of Obama's presidency, citizenship and birth certificate. Since being elected president, Trump has described POTUS 44 in much more favorable terms, and recently revealed that he's pretty sure Obama likes him. But now, Trump is accusing Obama of orchestrating protests against him.

"I think he is behind it," Trump said during a Fox and Friends interview that aired this morning, when asked about the protests. "I also think it's politics. That's the way it is."

"I think that President Obama's behind it because his people are certainly behind it," he added. "And some of the leaks possibly come from that group, you know, some of the leaks—which are very serious leaks, because they're very bad in terms of national security." Trump seemed pretty sanguine about the whole thing, because he "understands that's politics." Needless to say, he provided no evidence to support his accusation.

It's not clear whether Trump still believes that Obama is secretly his friend. But on balance, given what we know about Trump's business practices, it actually makes total sense that he wouldn't see liking someone and going against them as mutually exclusive concepts.

Emma Dibdin Emma Dibdin is a freelance writer based in Los Angeles who writes about culture, mental health, and true crime.
This content is created and maintained by a third party, and imported onto this page to help users provide their email addresses. You may be able to find more information about this and similar content at piano.io
Advertisement - Continue Reading Below
More From Politics
What Liberation Means This Juneteenth
Kathryn Garcia: It's Time to Step Up or Shut Up
Advertisement - Continue Reading Below
A Valedictorian Speaks Out Against Abortion Bans
Standing Between Care and Violence
Seeking Healing a Century After the Tulsa Massacre
What to Know about Texas's Abortion "Trigger Ban"
A New Book Invites Us to Rethink Menstrual Equity
We Must Remember George Floyd's Legacy
This Is How Much Joe Biden Is Worth
Joe Biden's Granddaughter Is His Biggest Fan