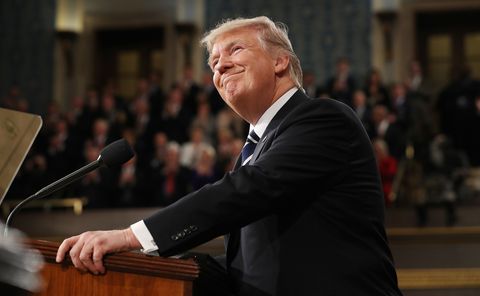 Despite being President of the United States and presumably having many important things to do (other than golfing at the "Winter White House"), Donald Trump hasn't given up his addiction to Twitter. The president persistently tweets from his personal account @realDonaldTrump, with musings ranging from the mundane/egotistical, to diatribes against Arnold Schwarzenegger, to dangerous accusations about wiretapping. But...WHY?

"Well, let me tell you about Twitter," the President said during an interview with Fox News host Tucker Carlson. "I think that maybe I wouldn't be here if it wasn't for Twitter because I get such a fake press, such a dishonest press."

That's debatable (most of the media companies Trump takes issue with are extremely reputable), but the key point here is that Trump wants to control his narrative—and if the media won't paint him in a positive light, he'll do it himself.

"There's a lot of fake news," he continued. "So if I'm not going to—if they're not going to do me the honor and the public the honor of spreading my word accurately as it was meant, and you know exactly what I'm talking about, because there's been nobody in history that got more dishonest media than I've gotten. […] So, when I can reach, whether it's 90 million or 100 million or 80 million, however many people it may turn out to be, when you add everything up—and then of course it gets disseminated from there—when I can reach that many people, Twitter is a wonderful thing for me, because I get the word out."

So, what have we learned? Trump is spreading his own gospel, Twitter lets him do it, and he wouldn't be President without it.

Mehera Bonner Contributor Mehera Bonner is a news writer who focuses on celebrities and royals.
This content is created and maintained by a third party, and imported onto this page to help users provide their email addresses. You may be able to find more information about this and similar content at piano.io
Advertisement - Continue Reading Below
More From Politics
What Liberation Means This Juneteenth
Kathryn Garcia: It's Time to Step Up or Shut Up
Advertisement - Continue Reading Below
A Valedictorian Speaks Out Against Abortion Bans
Standing Between Care and Violence
Seeking Healing a Century After the Tulsa Massacre
What to Know about Texas's Abortion "Trigger Ban"
A New Book Invites Us to Rethink Menstrual Equity
We Must Remember George Floyd's Legacy
This Is How Much Joe Biden Is Worth
Joe Biden's Granddaughter Is His Biggest Fan