It was a shocking move when President Trump appointed former media executive Steve Bannon to the National Security Council back in January. And it was just as shocking to learn this week that Bannon had been removed from said council. What's going on behind the scenes? Political junkies didn't have to wait long to find out—sources told the Daily Beast that Bannon and Jared Kushner, the President's senior advisor and son-in-law, are "fighting nonstop."

They are both Trump insiders, so what is there to fight about? Apparently Bannon and Kushner disagree about almost everything. "It's all about policy. There's tension [between them] on trade, health care, immigration, taxes, [terrorism]—you name it," said a senior official.

"Here's the reason there's no middle ground. You're a Democrat."

Two policy efforts led by Bannon—the Muslim travel ban and Trumpcare—were both big, public failures, which is increasing the tension, says the report. Now it seems Bannon has sunk to straight-up name-calling. Bannon "recently vented to us about Jared being a 'globalist' and a 'cuck'... He actually said 'cuck,' as in 'cuckservative,'" the source said. (Per Urban Dictionary, a cuckservative is "a self-styled 'conservative' who will cravenly sell out and undermine his home country's people, culture, and national interest in order to win approval with parties hostile or indifferent to them.) 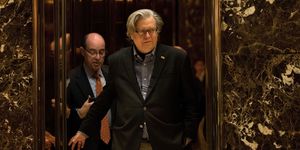 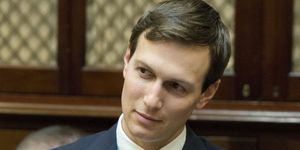 It Is So Weird That Jared Kushner Is in Iraq

No one knows how this cattiness will develop over the coming weeks and months of the Trump administration. But with the many things on the president's plate, playing referee between his two besties shouldn't be one of them.

Kaitlin Menza Kaitlin Menza is a freelance features writer.
This content is created and maintained by a third party, and imported onto this page to help users provide their email addresses. You may be able to find more information about this and similar content at piano.io
Advertisement - Continue Reading Below
More From Politics
The Anti-Choice Endgame: Power And Control
Give Domestic Workers the Protections They Deserve
Advertisement - Continue Reading Below
Kristin Urquiza Wants Justice for COVID-19 Victims
A Breakdown of VP Harris's Net Worth
WH Announces Removal of the Hyde Amendment
What Liberation Means This Juneteenth
Kathryn Garcia: It's Time to Step Up or Shut Up
A Valedictorian Speaks Out Against Abortion Bans
Standing Between Care and Violence
Seeking Healing a Century After the Tulsa Massacre