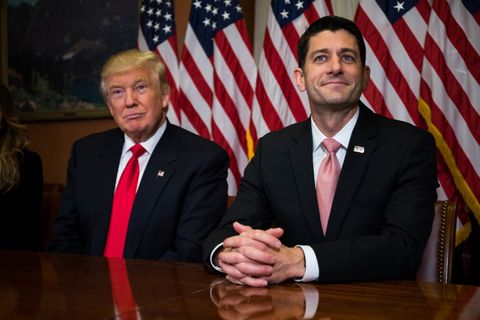 On Thursday afternoon, the House passed the American Health Care Act, the GOP's plan to repeal and replace Obamacare. The successful, if close, vote came after their initial act failed due to a division within the Republican party. It's the first step in a full repeal of the Affordable Care Act, but it's not official yet, since the Senate has to hold a vote to approve it, and President Trump must sign the bill after that.

The AHCA, if passed in its current form, would allow states to waive protections put in place under Obamacare. That means people with preexisting conditions could pay more for care (including, according to the bill, sexual assault and domestic abuse survivors), and things like pregnancy care could lose coverage under many health insurance plans. Planned Parenthood's president, Cecile Richards, has called it "the worst bill for women's health in a generation." And high-profile Democrats spoke out almost immediately, decrying the bill and calling on constituents to boot those who voted for the bill out of office.

Check out just a few of the outraged reactions online:

In 2018, when it comes time to vote, remember this day and how the American people have been ignored by the @GOP.

Nice healthcare you got there, Congressman. Would be a shame if anything happened to it. pic.twitter.com/wP5ZiRpVPu

I'll do what I can to make November 6, 2018 a dawn-to-dusk nightmare for the GOP. Fuck these smirking, entitled frauds. Tick tick tick.

Who knew my #vagina was a pre-existing condition! Thanks President Voldemort! Enjoy your celebration!
Congrats moms who voted for #trump! 🎉

Has someone put together a list of dem challengers I can donate to to oust republicans in swing districts?

If the Republicans vote away health care for their big biz big daddies, remember next November.

The resistance will not stop. https://t.co/X4dXfxya5Y