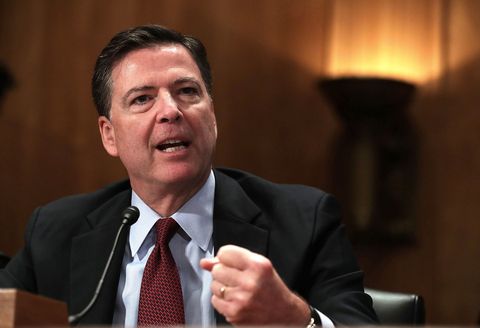 President Donald Trump terminated FBI director James Comey yesterday, on the recommendation of Attorney General Jeff Sessions and Deputy Attorney General Rod Rosenstein. The move apparently came as a surprise to several White House staffers and Comey himself, who apparently learned of his firing from watching television and thought he was being pranked. Lest you've forgotten: The FBI is currently investigating ties between Trump campaign staffers and the Russian government.

In the frantic hours after Press Secretary Sean Spicer announced the termination, the good citizens of Twitter took to their keyboards to express a whole range of reactions over the news.

Given the fact that our house is on fire, I believe sending the firefighters home & letting the fire itself pick new ones is the way to go. https://t.co/RN0B2FemfD

After all the trust the Trump administration has built up, it deserves the benefit of the doubt on this one.

Chris Christie staring at his phone, praying that it rings.

"Can we film me firing him in a boardroom?"

Is the word "Nixonian" or "Nixonesque"?

Is there such a phrase as "Nixonian"? How can this be right? We need about 10 more Sally Yateses to put an end to this mess.

And Of Course, Puns

Kaitlin Menza Kaitlin Menza is a freelance features writer.
Advertisement - Continue Reading Below
More From Politics
What the ACLU Will Fight For in the Next 100 Years
Behind the Controversy at the Women's March
Advertisement - Continue Reading Below
Women Are Not Granted Equality in the Constitution
Electability Is About Us—Not the Candidate
Everybody Running for President In 2020
Time’s Up for Wall Street
Women of Color Ruled Last Night's Debate
Cory Booker, Rosario Dawson Are Traveling Together
Door Knocking With Field Organizers in Iowa
Is Megyn Kelly a Feminist or What?