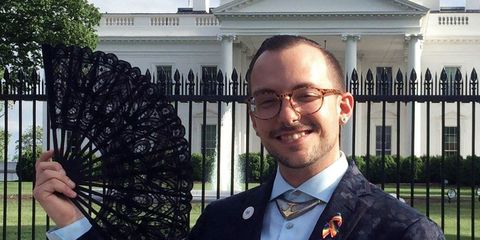 Nikos Giannopoulos was selected as Rhode Island's Teacher of the Year, and so he took a trip to the White House last week to receive his honor. Giannopoulos snapped a photo with the President and the First Lady and it quickly went viral—simultaneously confirming that he truly does lead by example.

Holding a fan, wearing a rainbow LGBTQ pin, and standing next to Donald Trump, Giannopoulos captioned the photo, "Rhode Island Teacher of the Year 2017 meets the 45th President of the United States. That's all."

Afterwards, Giannopoulos explained the meaning behind his fashion statement. "The issue with being openly queer in our existence is constantly politicized. They never stop to think: Oh, maybe that's just who I am," says Giannopoulus. Considering Trump's White House has—so far—revoked the rights of transgender individuals, and has hired an adviser that's cool with conversion therapy, Giannopoulos is certainly making an important statement by posing next to the President.

Being openly queer is constantly politicized. They never stop to think: Oh, maybe that's just who I am.

Giannopoulous elaborated in another interview, "The fan represents self-acceptance and being unabashedly myself in a society that's not always ready to accept that."

How did the President respond? "Trump complimented it right away...And he told me I had great style."

Ultimately, Giannopoulos' decision to strike a visibly queer pose next to President Trump makes an important statement for LGBTQ people everywhere. Regardless of policies and prejudice, it's important to be true to yourself, and dress however you want.

Amy Mackelden Weekend Editor Amy Mackelden is the Weekend Editor at HarpersBAZAAR.com, where she writes about entertainment, celebrity news, beauty, and fashion.
Advertisement - Continue Reading Below
More From Politics
Get to Know CBS News Anchor Norah O'Donnell
Everything We Know About Senator Warren's Husband
Advertisement - Continue Reading Below
Mayor Pete's Husband Would Be a "First Gentleman"
How a Parkland Mom Turned Her Grief into Action
He Voted for Trump. She Voted for Bernie.
How Guerrilla Feminists Are Fighting Femicide
Who Was Mayor Pete's Father, Joseph Buttigieg?
Nancy Pelosi, Icon, Ripped Up Trump's SOTU Address
Thoughts From a First-Time Caucus-Goer
And Now, a Word From the Future Voters of Iowa