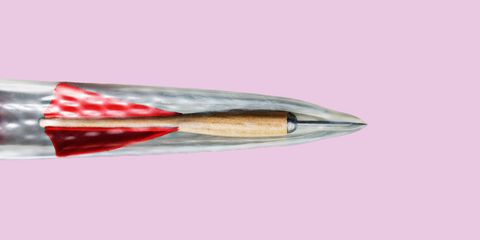 I have a friend who gets UTIs within nanoseconds of penetration. One has consistent yeast infections. One bleeds after sex, but only occasionally, which keeps things interesting. Like sexual roulette! And there are the women who have incredibly rare vaginal issues, like possessing two of them. We all have our ladyparts war stories.

But mine is a little bit different. I am, as you've likely deduced from that headline up there, allergic to semen. Seminal plasma allergy is the fancy medical term for it, though many medical professionals are on the fence about whether it even exists. Some say it's incredibly rare, and that a painful reaction (like mine) most likely has some other sexual cause; some say it affects up to 12% of women.

Here's what happens: If I have sex without a condom, and my partner ejaculates inside of me, my vagina and vulva start to swell up within 10 minutes. The swelling isn't as bad as the burning, which feels like I've been doused in hot acid. This sensation goes on for hours, making it difficult to sit, walk, or drive. Not to mention pee.

My vagina and vulva start to swell up within 10 minutes.

So, yes, it's annoying that doctors have told me my pain is not a thing. That I probably "wasn't lubricated enough" and the guy tore something inside of me. "Listen, I was lubricated plenty," is just one of the many awkward things I've had to say to one of the many gynecologists I've seen over the years.

I lost my virginity at age 17 to my high-school sweetheart. Being two teens in love, we humped like bunnies—and eventually decided to rely on birth control pills alone. It would hurt afterwards, a lot, but what did I know about sex? Maybe it was the frequency. Maybe it was his stamina (bless his heart, there's no way I could still have sex for 45 minutes while watching Chappelle's Show). Either way, movies had convinced me that, for women, maybe sex just kinda always hurts.

Eventually I brought it up with my gynecologist, who was dubious. She listed all the much more likely causes, then asked if it happened with other guys. It is possible for people to react this way to some men's proteins but not others, she said. I told her I'd only been with my boyfriend, and she replied with a semi-winky, semi-serious, "Well, don't tell your boyfriend I told you this, but you're just going to have to sleep with a lot more men to be sure."

Years later we did break up and I did sleep with someone else, just as the gynecologist foretold. I used condoms with my two subsequent boyfriends, and the sex was pain-free bliss. I could walk upright within minutes! I could speak to someone an hour later and not still have a wet washcloth in my pants to cool the burning.

That's how I learned a frosty can of Bud Light is a perfect ice pack for your crotch.

Around age 24, my then-boyfriend and I tried to go without a condom again, just to check (and because guys seem to universally and unequivocally hate using condoms, and will use any science experiment as an excuse not to wear one). Yep, the searing pain surged right back. Tears leaked out of my eyes as I struggled to breathe through it. The guy ran around the house like crazy trying to find anything that would help, and that's how I learned that a frosty can of Bud Light is a perfect ice pack for your crotch.

To answer a question that sexual partners love to proffer, no, it doesn't happen if you ejaculate elsewhere on my body, or inside my mouth. No other area swells up or develops a rash. Not sure why it works that way, but grateful for the option.

Of course, there is one more detail to consider: What about if and when I want to get pregnant? Luckily that problem is far off, but I know I'd like the guy to be hot enough that I still want to bang him through the pain…and kind enough that he'll position a pint of ice cream near my crotch afterward.