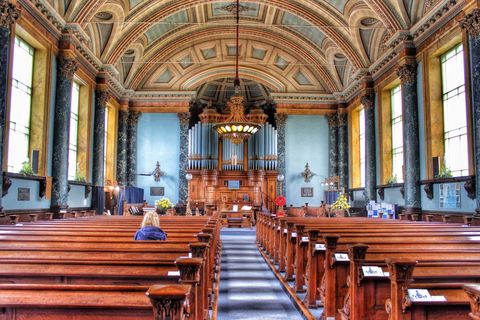 As a pastor-in-training at my church, Colin* was smart, dedicated, and kind of a snob—the exact qualities I was attracted to in my early 30s. A lifelong member of the Evangelical Lutheran Church in America, I liked the rigor of devout religion, from the march through the major and minor holidays of the year to the repetitious demands of weekly worship. One of my church's mottos was that we were always being made new, and I loved that idea.

Colin seemed to feel the same way, and since he was almost a pastor, I trusted him easily. He was a few years younger than me, but so earnest and serious that he seemed older. Soon, I had a crush on him, and, over coffee one day, I confessed my feelings.

"Hmmm," he said. "Let's think about this like a book. We've only turned the first page. We don't know what the other pages hold." He went on to explain he could be kicked out of seminary if he was romantically involved with a member of the congregation he was serving. He'd have more freedom after he wrapped up his time at my church in a few months.

"Can we wait and see?" he asked. I eagerly agreed, thrilled that someone I liked and respected so much might reciprocate my interest.

I referred to our future together, making plans, and he didn't correct me.

What I didn't know was that Colin was already in a relationship. And, even more unfortunately for me, it was with a man. Although my particular congregation was proudly inclusive, with a senior pastor who rebelliously married same-sex couples long before it was accepted by the national church, the fact of the matter was that the ELCA did not yet accept gay people as clergy.

But I couldn't allow myself to really see it. I shrugged off any personality trait of Colin's which could be perceived as stereotypically gay. Sure, he was fond of classical music and loved fancy cheeses, but so do plenty of straight Lutheran pastors (and humans). Besides, as a playwright, I was used to working in an industry where gender and sexuality were understood to be fluid. Plenty of people who identified as gay still found themselves in straight, romantic relationships, and vice versa. So even if he was, maybe, potentially gay...that didn't mean he wasn't romantically interested in me. Wasn't that the true meaning of acceptance?

I was blind to the fact that in order to be ordained in the Lutheran Church, Colin needed to go back into the closet. Until the Church changed, Colin needed to pretend to be celibate, or at least a heterosexual man in a committed relationship with a woman. While he may not have gone looking for a beard, apparently I fit the role of one perfectly.

His ambiguous answer when I confessed my feelings had felt less like a rejection and more like a promise. He couldn't (and didn't) tell me his true feelings, but I believed that all would be well soon. In the meantime, he welcomed my devoted help with his work. I stayed up all night writing a series of devotions with him, and ran an important committee at the church at his request.

Before long, we had a social life together outside church. The idea of socializing with the clergy may seem bizarre to those raised to revere them, but the Lutheran church is generally more casual about such things, since part of our beliefs is that we're all of equal standing. Pastors at that church went to the symphony or to dinner with members of the congregation; some of them even vacationed together. Far from finding anything troubling about our relationship, everyone at the church seemed to be delighted that we were becoming an item, and often commented about how well we complemented each other.

I enjoyed playing the role of charming companion to a spiritually wise counselor, standing beside him at church functions and the brunch our church held after every Sunday morning service. I listened to Colin's sermon drafts and suggested jokes here and there. We went to concerts and museums together. He joined me on a trip to Long Island to see one of my plays in performance. I referred to our future together, making plans, and he didn't correct me.

At some point, though, I found myself having a twisted version of The Talk. What are we?! Months after we'd started our relationship, I confronted him and asked if he planned to date me when his internship ended. That's when he said he would never be interested in me. I sobbed. He didn't say that he was gay, and I still didn't believe that could be the reason—I thought it must be something else. Maybe it was me.

It felt like a break-up, of course, and I was unbelievably hurt. I couldn't find the grace or love he preached about in his actions. Eventually, he was forced to apologize, after the senior pastor asked me why he had seen me run by his office, sobbing, that day. He understood that Colin was responsible, even if only by sins of omission.

What I remember most about the apology was how Colin seethed at being forced to say it. He gave a litany of the ways he was embarrassed, too—how he found my affection disgusting but needed to push through for his cover story. At least, I thought to myself, he was finally acknowledging the truth.

Every person who found genuine solace in Colin's ministry irritated me, which was unfair to us all.

A few weeks after he apologized, I ran into another member of the congregation. Unaware of what had gone on between us, the man, out and proud himself, told me about welcoming Colin and his boyfriend to dinner. He teased me that he had wondered if Colin and I were a "thing," but wasn't surprised that it turned out I was helping him "pass." I didn't say a word about what had really happened—mostly to protect myself—but was hurt even further. Even if Colin was out to those he could be sure were sympathetic, I realized sadly, he still had never shared it with me directly, as a friend.

I tried to stay in that congregation, but I couldn't, especially after Colin was ordained and took a full-time job there. Every person who found genuine solace in Colin's ministry irritated me, which was unfair to us all. I was bitterly angry at myself for being duped. I was angry, too, at people like the friend I ran into on the train, who knew the truth but never realized what Colin was doing to me in front of them. I couldn't find any comfort in the rigor and litany of religion.

For a while, I wandered around, trying out different churches. Nothing suited me. Finally, I stumbled into a Lutheran congregation in a new town, one with a lovely lady pastor, who I loved–platonically!–on sight. At home again in the Church I had never wanted to leave, I felt renewed.

It was a difficult, painful way for grace to do its business, but I couldn't deny that it had succeeded. As with so many other tough situations, I'm a better person for experiencing it: less dreamy-eyed, less passive, more focused, more discerning.

As of 2010, the ELCA officially, happily ordains LGBT ministers. Reverend Asher O'Callaghan of Denver became the first known transgender person to be ordained by the ELCA earlier this year. At his ordination ceremony, he received the following blessing: May God bless you with discomfort at easy answers, half truths and superficial relationships, so that you may live deep within your heart.

*Name has been changed.