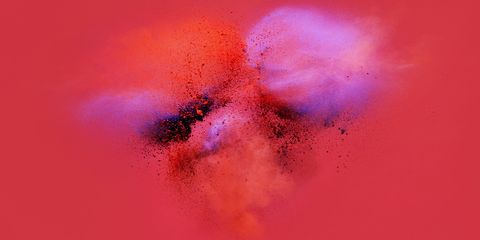 I've never particularly needed help in the libido department, but like sleep and money I figure you can never get enough. If it could help a woman with a low libido, I reasoned that Sex Dust could theoretically turn me from Diana Prince to Wonder Woman—my sexual energy so powerful it could make a man wonder if he slept with a regular ol' woman or a true sex goddess.

Created by Moon Juice, a brand of juices, tonics, and health products beloved by L.A. folk, Sex Dust is an "aphrodisiac warming potion that will send waves of blood to all the right places." For it to work, you add a teaspoon to any beverage and just kick back and let the dust do its thing. Ironically (or not so ironically), Moon Juice recommends mixing it with nut milk.

"I handed over my sex drive on a platter to the power of Sex Dust, hoping it could give me the libido to rival an 18-year-old boy."

Created by Amanda Chantal Bacon, the ingredients (which they say are "wildly crafted") include Ho Shou Wu, Cistanche, Cacao, Shilajit, Maca, Epimedium (otherwise known as horny goat weed), Schisandra, and Stevia, so you don't have to worry about sugar. Excluding the Stevia, the ingredients are all purported to improve blood flow and virility. (FYI none of these teeeechnically have scientific backing, so you're basically just trusting Amanda and Gwyneth's expertise in holistic health.) With that in mind, I handed over my sex drive on a platter to the power of Sex Dust, hoping it could give me the libido to rival an 18-year-old boy.

After I placed my order, it arrived in a little jar with purple label and exceptionally cute typography on the front. Honestly, it was already getting me in the mood. (What, I'm a sucker for pretty packaging.) Inside it looks like powdered brownie mix, the kind you use when you like to pretend you bake from scratch but don't trust anyone other than Pillsbury to help in the kitchen.

I opted to mix the Sex Dust in with my daily green tea. (FYI, Paltrow enjoys it in her morning smoothie.) Taking my first swig, I have to be honest—I almost choked. It tasted like mung bean water. (Mung beans are delicious, just not when your water is flavored like them.) Sour with a tinge of dirt, I imagined it was the kind of thing Gwyneth relishes as she munches on dandelions and seaweed. Reluctantly, I sipped the brew feeling less like a shining dew drop à la Gwyneth and more like a wannabe teen witch trying to cast some sort of spell. Or a dog who came upon a dirty puddle and decided to drink out of it.

But who cares what it tastes like if my libido is on fire?!

Such was my scientific mentality when I decided to test Sex Dust in four different situations. Would it be awkward at work? Would I feel like a rabbit during mating season on a date? Or would it all just be the same old same old?

As I was writing, I began to feel an increase in energy, like I just drank three cups of coffee (for the record I did not). Was it the Sex Dust? It seemed too good to be true, like bread with no carbs or cheesecake with no calories. I had mentally steeled myself against any possible placebo effects so I could truly ascertain the effectiveness of the Sex Dust, yet here I was feeling abnormally energetic. I was at home all by lonesome, so I didn't have anyone to have sex with. But seeing as Sex Dust does support creative potential, I decided to channel the energy towards writing. 👍

At a Condo Board Meeting

Sex Dust might have won the first round, but could it work its magic at the most monotonous of all events: a condo board meeting?

Have you ever been so bored that eating nails would seem more appealing? That's what a board meeting is like. Nothing could be more non-sexual than getting my teeth drilled at the dentist or getting a whiff of the stinky cheese guy at the gym. I prepared my green tea Sex Dust and toted it to the meeting. As I sipped on the funky tasting dirt water I wondered if anyone had done a taste test on this. An hour later and several arguments later, I was no hornier than I was before—but I did end up working until 1 a.m. on some new items I was designing for my Etsy store. Turns out some situations will never be sexy...

Speaking of stinky cheese guy, I thought I should try the concoction at the gym. With all the heavy breathing, grunting, and toned biceps on display, the gym offers ample opportunities for randy feelings to develop. A few sips in, my resolve began to waver. This stuff really did not taste good. But then I thought would Ronda Rousey have become a champion if she wasn't able to withstand a little pain? No pain no gain, my friends. So like a champion UFC fighter, I continued to drink my concoction, all the while ignoring my tastebuds' cries for help. I felt a boost of energy, but just like the first time I drank it, the effects felt more like caffeine than an overwhelming desire to hang out with a penis. Regardless, I decided to channel the energy into working out.

"I felt a boost of energy, but just like the first time I drank it, the effects felt more like caffeine than an overwhelming desire to hang out with a penis."

With an Actual Man

About 30 minutes before meeting up with my guy (we'll call him Drew), I brewed some Sex Dust green tea hoping for a night of intense fireworks. An old cheerleading chant came into my head as I took a swig: It's your time to shine, let's come from behind, shake shake what you've got, oooh why not! I never thought I would be cheering on something I ingest but I suppose life is funny that way.

We met up at the movies, an ideal place for illicit petting and making out. Those things did happen, but as he initiated it, I'm not sure I can give Sex Dust any credit. As for me, I was into it but I can't remember a time in my life when I wasn't into making out at the movies. Post-movie I wanted to have sex but that wasn't any different than any other day—I had expected to feel like a horn dog raging with desire so strong I was willing to hump a couch. We did perform the horizontal mambo (can I still say that without sounding like a dork?) but alas I didn't turn into the crazed animal I hoped.

Sex Dust gave me some energy, but it didn't quite feel like an aphrodisiac as much as an energy booster. It was sort of the equivalent of having coffee mixed with champagne—I felt energetic and slightly buzzy. If you have a low libido, I can see how this could help you get more in the mood for sexy times. If you're already operating at full speed, you might just find yourself working on that project until 1 a.m. because you have so much energy.

Moon Juice's reviews on Amazon for all their other products are practically all five stars, so maybe I'm just the outlier. Or maybe my libido is perfect the way it is and doesn't need any help. (#Blessed) If you didn't have a headache and you took ibuprofen would you would never notice, right? Same thing with Sex Dust, I imagine. So I decided to give the remaining dust to my friend who lost touch with her libido years ago. And guess what? She boned her husband that night.