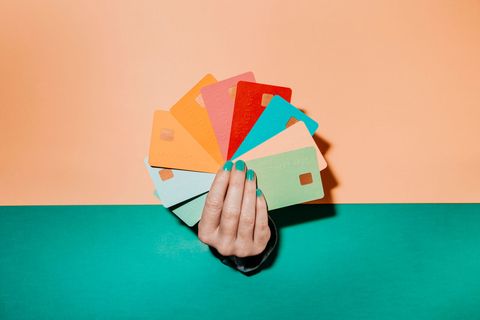 I didn't apply for my first credit card until my mid-20s. I was a hot mess, and I had a hunch that I wouldn't handle credit well. True to form, when I did finally apply for my first Platinum Visa, I quickly racked up a $5,000 balance—one I'm still paying off. But two more cards, one personal loan, and—between my husband and I—over $250,000 in student loans later, I could not be more grateful: My debt made it possible for me to leave my abusive fiancé.

I stayed with him long after I knew it was over, largely because I didn't believe I could make it on my own—financially or otherwise. Money was always tight. We survived on food stamps. He worked in a factory and I floated from job to job, waist-deep in survival mode, and with zero confidence in my ability to provide for my two-year-old daughter or even myself.

"In the small town that raised me, no one ever taught me this type of behavior was rape."

What he did to me made me feel like I didn't matter: He'd hold me down and force himself on me. I'd routinely wake up to find him already on top of me. It took me 10 years and a great deal of counseling to recognize this type of violence as abuse. In the small town that raised me, no one ever taught me that what he was doing was rape.

I told myself he wasn't malicious. He'd grown up in gruesome circumstances, and I never blamed him. If anything, I wanted to save him. I figured this would be my lot in life.

To cope, I numbed. I stayed high, pretty much all the time, on anything I could get my hands on. Looking back, I don't know how I lived that way. But at the time it was the only thing that kept me going.

He proposed one Christmas morning, and I said yes immediately. I didn't know I had a choice. We started going to counseling, paid for by the church we sporadically attended. We each had our own therapist—a husband-and-wife team, who were almost exactly our age. I hated that. I hated the stark contrast between what my life had become and what it, conceivably, might have been.

One morning, I walked into the female therapist's office and she asked how I was doing.

"Well, we've agreed not to have sex until the wedding," I said. "He thinks it's silly because, obviously, we've already had sex. I told him I wouldn't sleep with him, and asked him to sleep on the couch. He started yelling, threatening to go stay at his brother's. So, I let him go. It gave me time to look at wedding dresses! I have these three picked out."

She looked at me and then at the magazine clippings I was holding. I could tell she was trying to choose her next words carefully. Finally, she asked, "Are you sure you want to marry him?"

I just stared at her.

I prayed about it for three days. I asked for strength and a plan. On the third day, I skipped my routine afternoon joint—even in throes of addiction, I knew I wanted to be clear-headed for this. When he got home from work, I sat him down and calmly told him I was leaving. We had broken up before, but we both knew this was different. He was furious, but he didn't try to stop me. I grabbed my overnight bag and our little girl and drove to my parents' house.

I spent the next six months drinking and hooking up with random guys at bars. That haziness culminated in a DWI, and I lost my manager position at an ice cream franchise—the only decent job I'd ever had. Things got worse before they got better. I didn't know at the time that I was trying to process years of abuse at the hands of someone I loved. I just thought I was a horrible person.

"For me, debt has meant freedom—the ticket out of an abusive relationship, the cost to ultimately thrive."

But I kept going to counseling. The DWI turned out to be a godsend because it forced me into a 10-week outpatient rehab program. Eventually, I got a job at a megachurch. Some would call it a janitor position, but my title was assistant facilities manager, and I was proud. I was determined to stay sober and keep this job. I saved enough money to rent a small two-bedroom apartment. My daughter and I made it work. My boss let me take a class at the local community college in the middle of the day. There, I transitioned from a survivor to a dreamer. And bonus: zero debt.

But we were barely making ends meet and we needed more, which no matter how many times I turned it over in my head meant an advanced degree. I would have to figure out how to pay for college with a toddler in tow. I had a couple of options:

I chose the latter. A hard decision, for sure, but I made the most of it: I did well in school, graduated with honors, and still had time to be present for my daughter. My education eventually enabled me to pursue a full-time writing career.

Six figures of debt later, I do not regret it. I don't see my debt the way most people do, as a burden. For me, debt has meant freedom—the ticket out of an abusive relationship, the cost to ultimately thrive. And it was worth it.

My debt has shaped me, much in the way that overcoming abuse and overcoming addiction have. And yet, despite the astronomical sum I carry, I know I'm one of the lucky few.