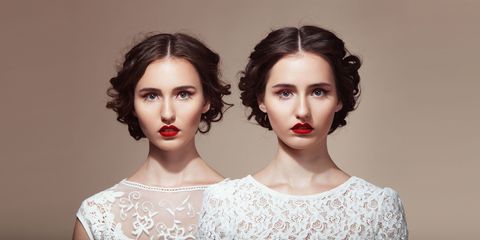 A little while ago, my father called me from the opposite side of the world to tell me he had a new girlfriend.

"I'm in love!" he said, giddy on the other end of the phone, sounding like a teenage girl riding the waves of a new crush. "I haven't felt like this in, oh god, I can't even remember."

She was 30 years his junior—she was almost exactly my age.

"Not only was his new girlfriend half his age, but he was considering moving to Thailand with her."

My dad has never been a typical parental figure. He has friends all over the globe and from all sorts of places. He'll fly overseas at a moment's notice, calling from the airport to say a quick goodbye. He flutters from job to job, never really explaining his reasons for leaving, constantly finding himself in unlikely circumstances. "I'm playing table tennis with the Under-30s Champion of Beijing," he'll say when I call him on a Friday night. Or, "I'm on a boat, can you hear the salsa music?"

These characteristics make him lovably unique and very funny. But at times, his exciting, spur-of-the-moment life can be tiring to keep up with. Case in point: Not only did I have to cope with the fact that his new girlfriend was half his age, but also that he was considering moving to Thailand with her. Meanwhile, my own marriage had ended dramatically and very abruptly—and I wasn't exactly in the state of mind to be swept up in his romantic fantasy.

"But she's so much younger than you!" I pointed out again. "Don't you notice the age gap?"

Yes, he said, but it didn't bother him. "I'm exhausted," he admitted, "but I haven't felt so alive in years!"

"Does she know you're not a millionaire?" I rallied. This made him chuckle heartily. If she was using him, it wasn't for the little money he had. I tried another angle. "Do you really want to move to Thailand? That sounds kind of crazy, even for you." He reasoned that he was craving something tropical.

Since meeting her, he said his life had changed. They had incredible chemistry and could talk about almost anything. She made him laugh, she was smart, she challenged him.

More than a decade earlier, he and my mother had gone through a messy divorce. They'd been madly in love for many years, but their marriage ended in screaming matches and arguments over money. He was still in love with her when they separated, but the problems in their relationship had ultimately worn my mother down. She was the one who finally walked away.

He was unable (or rather unwilling) to start a new serious relationship. He confided in me that he wasn't the least bit interested in falling in love again. It was his second divorce, after all. He was no longer interested in long-term commitment. Now, he wanted to be committed to himself—spending some quality time on his own terms. He wanted to travel, eat dinner when and where he wanted, and wear his old underwear around the house. After a few years of living this way, he revealed that he never wanted to live with another woman again. He proudly declared that he would be a bachelor forever.

"I still have no idea whether it will last, but I'm letting him live his life, as a parent might allow their teenager to make the same mistakes they did."

Initially, I worried about him. I pictured him growing lonely in his old age. But as time went on, I realized he was thriving on his own—and he began to even inspire me. Throughout my 20s, when I'd feel hopelessly rejected from another failed relationship, there he was, showing me that single life was enjoyable and freeing. I admired his independence. He was teaching me to focus on my own aspirations and goals—that living "selfishly" can be a deliberate and liberating choice.

Not long after they started dating, my father's new girlfriend had to move back to Thailand, without him. Despite the oceans between them, they've maintained their relationship. They Skype often, he visits frequently, and he continues to talk about her with the same infatuation. When I ask him if he still loves her as intensely as he did before, he tells me, yes. I still have no idea whether it will last, but I'm letting him live his life, as a parent might allow their teenager to make the same mistakes they did.

Back Stateside, I've come to understand that the best thing about my dad isn't his quirkiness—it's his belief in love. Love for life, other people, and himself. Love when it's unexpected. Love even when it's inconvenient. And now, to me, he's a whole new kind of inspiring.