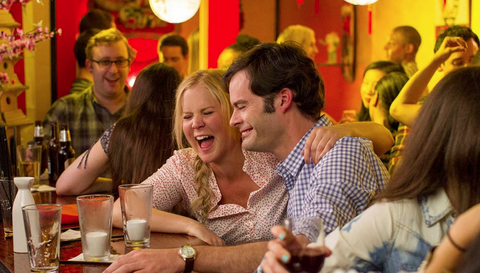 The weekend. Sigh. I worked on my novel for most of it. Last Monday, my agent told me she thought I should revise the manuscript a leeetle bit more before she sends it out to editors (who are the one with the power to "buy" the book, which would lead to it getting published, which would lead to a bestseller--if you guys are behind me!). So the majority of my time was spent chained to my keyboard.

I did take a break for a tea date with a guy who contacted me via the Internet personals. Between his adorable pictures--including one of him in a cap and sweater vest on his family's farm that made him look like he just stepped out of "Quintessentially Irish" catalogue--and his love for books, not to mention his good job, he seemed a little too good to be true. I braced myself for some kind of disappointment--for him to have about 75% less hair in real life, or 75 more pounds, or to conveniently have only 75 cents on him so he could stick me with the check.

But when I walked into Cafe Regular and saw him standing there, smiling at me with his startling bright gray eyes, and saying "Maura?" I had to take a moment to steady myself: He was the real deal! We spent a couple of pleasant hours chatting, and at the end of it, he asked if I'd like to go to dinner with him that very evening. Since I wanted to stick to my work schedule, I declined, but he followed up with a sweet text saying we should do it some other time soon.

(All of which is A LOT more than I can say for some people.)

The one other social thing I did this weekend: I met up with Dating Coach Extraordinaire John Keegan, who was recently profiled in the New York Times. I loved the little piece about him, in which he talked about how the most successful flirts are the most playful, innocent ones. He'd also mentioned how he made a pact with himself, a few years ago, to talk to five new women a day for three weeks straight--and to ask every single one for her phone number. Living flirtatiously, indeed! (Do I need to ramp it up, or what?) Between the cute things he said and the appealingly approachable way he came across in the pictures--with a sheepish smile and a slouchy aw-shucks carriage, wearing flat Chuck-Taylor-like sneakers, skinny jeans, and an adorable plaid cap*--I though: There's really something very charming about him. Besides, I really liked the idea of flirting as playfulness. So I wrote and asked if he'd be willing to collaborate with me in some way for the site.

So it was that on Friday afternoon, John and I spent some QT at the Whole Foods Cafe @ Union Square. He lay down a few basic pieces of dating advice that he thinks are important for any single person to keep in mind during the early stages of a dating situation:

-Don't act like a needy person. In fact, until you're in a solid relationship, try to hide any neediness almost entirely. (I mean, if you need to take a leak; or to eat a peanut-butter-and-jelly-sandwich you have in your handbag for fits of low blood sugar; or to have a glass of water ... by all means. But don't act like there's anything you need from the other person.)

-Don't be negative. This means you shouldn't criticize the loud/poorly dressed/gauche people on the other side of the bar from you. Don't complain that your Pinot is not quite Noir-y enough, or that your salad would've been a lot more awesome if they'd only added a splash of Holy Water from Fatima on it. Don't complain about your job. Or your family. Or that one really toxic friend of yours. (I don't care if she always gets wasted and throws up on your shoes, or if she always borrows money in small denominations--like $5 here, $10 there--and never pays you back. Do not mention her! And really, while you're at it, shouldn't you consider breaking up with her?) If you need to vent about any of these things--wait till you're sitting with an old pal, or you're on the couch at your shrink's office. A big part of the reason we're attracted to people is because we think they are going to make our lives happier--and the more negative you are, the less likely it is that a dude will think you'll bring some sunshine to his sad existence.

-Always keep this idea in the forefront of your mind: You are not trying to find out if the person you are flirting with or dating accepts YOU. You are trying to figure out if YOU accept HIM. Does he have qualities that you value? Does he make you feel good? Does he treat you the way you want to be treated?

-Remember that most guys like to pursue. So, while you may be the one initiating contact ... let him do the work after you've met. Let him call you for dates, write the follow-up emails, and plan for the future. Of course, you want to make it clear that you enjoy his company--but keep him guessing about just how much you really like him until you feel comfortable with the fact that he's totally into you.

-Have fun and be playful. Think about how awesome it is when someone makes a little joke, says something out of the ordinary, or simply engages in a spontaneous act of goofiness. We all like to smile and (even better) to laugh. When you're flirting, approach strangers with the attitude that if nothing else happens, at least you're going to have fun--and you'll always come out a winner.

I'll be telling you more about what John teaches me in the days and weeks to come.

*What is it with caps all of a sudden? I almost always think they look dorky and affected ... but suddenly, two dudes in one weekend make them look good.

-please check out my slight correction or explanation attached to Friday's comments.

-Paris: Speaking of teaching classes that empower men to flirt: That's exactly what my boy John does! So you and I are on the same wave-length, hermana. ... I haven't read that book you mention, should I? ... And I agree that it really depends on the person and the situation when it comes to sex; with some people, it feels okay to have sex early on. And with others, it just doesn't.

-Topaz: Thank you for the encouragement! And for telling me to go with my gut.