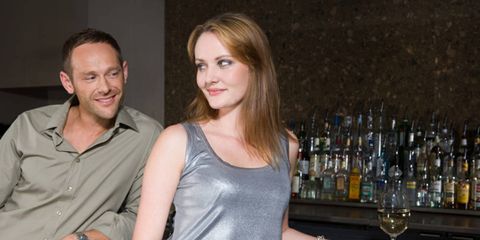 Boy, was I ever out of it yesterday. I've mentioned that I have this genetic predisposition to depression, and that earlier in the year, for the first time in my life, I started taking anti-depressants, which have been a god-send. (Not that I believe in God. But you know what I mean.) But I forgot to take my pill Tuesday night, and yesterday, the fog descended over my brain and clouded my vision. The thought raining down on me all day went something like this: My life is totally meaningless; I'm a nobody; what's the point of even going on when I'll never contribute to or matter in the world. Luckily, today, I'm fine again, perfectly medicated. But I mention this all as a public service announcement: If you are regularly having thoughts like mine, please, go see your doctor!

Now, finally, I'll talk about the hot date I had with the fireman on Monday night ...

He's from a family of firefighters and cops, and is going to law school part-time. (When I asked him what got him interested in law school, he said, "Well, I had a lot of spare time on my hands, so I figured I'd do something useful with it.") He is 25. He has a very thick New-York-outer-boroughs accent--which means certain consonants seem to disappear while others pop up unnecessarily in his speech: words like under (as in under-age) come out sounding like un-dah, and words like coffee sound like caaaww-fee. This basic information is pretty much all I knew about him before I arrived to meet him the other night, at a nice little wine bar in Park Slope.

I wanted to say Sorry I look exactly as old as I am--which is a lot older than you ... but I held off.

"I can't believe they didn't card me, actually," he continued. "That almost never happens." The bartender laughed.

The fireman did look younger than his years. He also resembled an anime hero--his hair was short around the sides, with a long front swath that cocked up, at a side angle; he had a small nose, small mouth, a small jaw; and there was not a single crease in his smooth face. He could've been a pretty boy, but between his tough accent, his large manly hands, and the way he was dressed--simply, in a shirt and slacks--that wasn't the vibe he was giving off.

As we warmed up to each other, I found myself quite entertained by his stories, and his rather unique outlook on life. He has many old-fashioned values (like a belief in brotherhood and chivalry) but he's also free-thinking and quirky, with a lot of interesting opinions. He's also quite smart and observant, as well as industrious: He's teaching himself Russian, in his spare time, so he can read some of the classic novelists in their native language. (Whereas I'm the slouch who's reading War+Peace in translation!)

He did most of the talking: I asked questions, and he responded, often at length. Under normal circumstances, this would probably start to bother me eventually. But he wasn't coming off as narcissistic or rude. It seemed clear that he was interested in me; he touched my knee in a friendly way a few times; I felt at ease. Also, I am a very inquisitive person, and I think sometimes it's hard for other people to ask me questions, when I'm so busy firing off my own. The one time the spotlight fell on me, he asked me where I'd gone to high school, and I said it was an all-girls Catholic prep in Jersey, where I had nuns as teachers and wore a uniform.

"Do you still have the skirt?"

Which I thought was pretty funny. Then conversation turned to another skirt--the one I was wearing that night. To the length of it, in particular.

"It's quite short," I admitted.

"Well, you got no complaints from me," the fireman said.

From a different person, a remark like that might have felt a little too aggressive or objectifying, but from him it just felt ... sexy!

The date progressed and we went to an amateur stand-up comedy night around the corner at a place called Belleville Lounge. The comics were pretty hit-or-miss, but some were downright hilarious, including a guy named Louis Katz (who did a long riff on the difficulties of using a public bathroom) and a woman who was up on stage talking about it's inevitably a bad scene when she's giving a guy a hand-job. "Nobody is happy in a situation like that," she was saying. "I mean, I don't even remember how to do it any more! The last time I gave a hand job, it was in a bed with Garfield sheets, and there was a Trapper Keeper laying on the floor!"

One particularly bad comedian turned his attention to the audience, after all his jokes kept bombing. After harassing a couple people towards the front of the room, he pointed at me, saying, "You. Yes, you. How long have you been with your boyfriend?"

I gupled. "A few hours?" I said, blushing so hard I'm sure my face temporarily turned the room red.

The comedian didn't believe me, and harangued me a little, calling me a liar. I tried to defend myself, while the fireman remained silent. (I don't blame him--it was rather uncomfortable, the whole situation!) Finally, though, the comedian said to the fireman, "What's wrong with you? Are you mute or something? You can't speak?"

The fireman pointed to me and said, "She's the front office. All inquiries go through her." Which, again, I thought was quite funny.

Anyway ... after the open mike came to a close, the fireman invited me back to his place, and I went. We hung out for a while, talking about this and that--music, his roommates, a recent article in The New Yorker that had moved me to tears--and then ...

Well ... I've gone on so long today! I should really stop here, and get this post up.

(This is kind of what the fireman looks like ... although he has a different helmet. And short hair, which is dark brown, not green.)

-McGig: I love the story about your grandmother. (And I think I love your accent--British Isles, right? I hear it in "fancied.")

-Lady Topaz! Hi there. You sound totally awesome, so I'm really glad you are reading (and writing in). Awkward about intimacy, me? Well, yes, absolutely. (I wonder which post in particular made you say that--maybe one about Arlo?) But I'm glad you find it endearing. ... As for this business of loving myself: I'd love to love me! But how? Any advice?

-Edwinna: you have two kids! I had no idea. But that makes perfect sense, actually, because you are so sweet and maternal. Okay, I will add this to the info about listening to Brits on NPR in my Edwinna database. ... Which country next?

-Love after Paris: You sound so worldly and wise--obviously, I'm the one who should be asking you for advice, not you me!

-Jenny: I've got abandonment issues up the wazoo--I seriously once had a breakdown (a few years ago) at a day spa because I was getting a facial, and when the woman left me to sit in the steam, I became convinced she'd forgotten about me. I started to cry, stormed out, left the place--they thought I was insane! I was! ... Anyway, I'm glad you have a happy relationship and that marriage isn't boring!