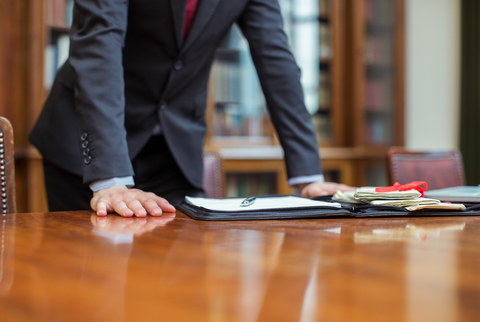 Other than catalogs and bills, I rarely get mail. So I was delighted several months ago when I received an official-looking letter. For the few seconds it took to open the envelope, I held out hope it contained something good. It didn't.

The letter was from the Civil Court of the City of New York. My ex-boyfriend Todd was suing me.

A few months before, my ex had sent me an e-mail I'd ignored, asking to be reimbursed for money he'd spent on a vacation we'd taken to India. He wanted more than $900—a figure that included a few big-ticket items like hotel and spa charges, as well as a comical number of smaller expenses, like $22 for appetizers and $18 for a scooter rental. Aside from being petty, this seemed wildly unfair. During the trip, our mutual willingness to pick up the check was one of the only ways we'd resembled a healthy couple. I'd paid for an equal share of our flights, meals, tickets, taxis, and drinks under the assumption that we were a normal, you-get-dinner-I'll-get-the-movie duo. Clearly, that was a mistake.

The problem with the trip wasn't that it had been expensive but that it had been a nightmare. We'd spent two weeks bickering in the heat, yelling across hotel lobbies, and fighting on roadsides among stray dogs. Ironically, one of our most heated arguments had taken place at the foot of a Buddha statue.

When we decided to go to India, we'd only been together a few months. Todd had asked me out a gazillion times, but I was reluctant to accept because my friends had warned me about his reputation — lots of cheating on the women he didn't care about, lots of smothering of the ones he did. I agreed to a first date because his persistence had worn me down, and, admittedly, I was tired of being single. After a few pleasant dinner and movie dates, I invited him on the trip—an excursion I'd originally planned to take alone—because I figured that traveling together might be a good way to see if we had a future.

And it was. Our squabbles weren't caused by traditional travel drama like who should hold the guidebook or when to ask for directions; they were rooted in Todd's insecurity about our fairly new relationship. He'd criticize me for withholding whatever emotional assurance he felt he deserved, and if I didn't express my love to a degree that met his satisfaction—casually kissing him on the cheek instead of the lips, for example—he'd threaten to leave the country.

As the vacation wore on, his aggressive neediness became unbearable. The worst fight took place on a deserted island in the Arabian Sea where we had planned to spend the night in a hut with no electricity, running water, or bathrooms. I'd unexpectedly gotten my period, and without any supplies, I had to rip a towel with my teeth and use it as a makeshift maxi pad. Instead of empathizing, Todd pouted, yelled, and revisited the details of a fight we'd had earlier that day. I sat in the ocean's shallow waters, praying a shark would come attack me.

I waited until we got home to end it because I knew he wouldn't take the news well and the last place I wanted to be trapped with my emotionally fragile, soon-to-be ex-boyfriend was in coach, on a 23-hour-long flight. The day we broke up, my dirty clothes were still stuffed in my suitcase. He pleaded for two hours, begging me to reconsider. The more he clung to the feeble reasons he believed our relationship could work, the more firm I became in my assertion that there was no chance. When his final appeal was denied, I knew he was upset, but I didn't think he'd literally expect me to pay for his disappointment.

I called the number on the back of the notice.

"Um, I just received this judgment thing saying I owe my ex-boyfriend over $900, but this is the first I'm hearing about it. Like, officially."

"You weren't present on the designated court date, so a default judgment was granted in favor of the claimant," the clerk said, while munching on what sounded like a salad.

"What? I never got anything about a court date."

"A notice to appear in court was sent to you. If you didn't receive it, you can apply to have the case reopened."

"That's insane. Can you sue someone for not loving you? Because that's what's happening here."

"You can pay the claimant or reopen the case. Those are your options, ma'am," the clerk replied.

I hung up and called my friend Chris.

"He seriously thinks I should give him $12 for a mojito he bought four months ago."

"You know I never liked this dude," Chris said. "Say the word and my friends and I will go to his place and have a little chat."

Although the thought of someone roughing Todd up did sound momentarily appealing, a playground scuffle wasn't going to solve our dispute. Todd was a 42-year-old man with a decent job and nice apartment. He didn't want my money; he wanted to punish me.

As I sat there doodling hateful words on the court document, his logic became clear. If he couldn't make me love him, he'd exploit the small degree of control he did have—his legal right to force me to see him, to hear him out, to have one final argument.

I hung up with Chris and got out my checkbook. Given my options—to appear in court or to deny Todd his last shred of power—$900 suddenly seemed like a bargain.