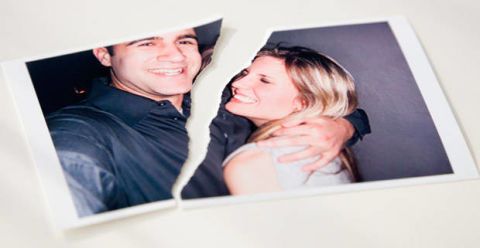 One minute you're happy and in love, the next he's delivering the "It's not you, it's me" speech. Why? We have the scoop on the real reasons most couples split up.

You Want Different Things
Initially you two were just hooking up but then you developed crushes and moved into a serious relationship. One of you may want things to progress further while the other is still just into late Friday night booty calls. The guy may want to be married in a year while you're happy having fun. Or he may still be getting over his ex while you want to move in to his place. Whatever the circumstance, it's not that the chemistry isn't right, it's just that you want different things out of the relationship.

You're At Different Points in Life
Often women think dating an older man is a good thing. It can also be a recipe for disaster. The older guy may be already settled down while the woman in her mid-twenties might still be figuring out who she is, what she wants to do for a living, where she wants to live long-term, and more. An age difference may be one reason you're at different points not just in life but in your relationship--sometimes older men may have already experienced the things you haven't yet done and they may not want to do it again, like kids, getting married, or moving for a job. If you're just at different points and your paths don't appear to connect, you will eventually split.

One Person Is Moving Too Fast
I've been in situations where I was in love with a woman but she moved way too fast and it scared me. Like, slowly move into my apartment without asking me after two months of dating. If we had better communication and talked things through we could have determined the right time for both of us to take that next step. But we didn't, so we broke up. I know I'm not alone here--in any relationship there is always going to be one person who wants to move forward more rapidly than the other. If that speed is radically different for one person, the other may get scared and call it quits.

Lack of Trust
There are a variety of reasons lack of trust in a relationship may develop. One person may do something to break that trust, like tell a whopper of a lie or cheat. Or one person may just carry some trauma from past relationships where that sort of thing happened. In either case it can be a bit like dating a wounded deer, where you want to get close and be comforting but the dynamic is too tenuous and you can't really relax with the other person. Once a trust is broken or never fully develops, it's hard to repair. Some people don't want to put in the work that is required to repair trust, so they leave.

An Acutal Issue
Sometimes, when you honestly reflect back on what was going on pre-break-up, it can be pretty clear what happened. You two were fighting a lot, either about one big recurring issue or several smaller issues. It got heated at times. You both said things that were incredibly hurtful (and that you did sorta mean). Hopefully things didn't get to the point of being verbally or physically abusive, but if they did then it's a good thing you're not together anymore.

The Emotional Affair
No one physically cheated, but one of you had an emotional affair. That's when one or both of you started flirting with someone else, bonding with them over long coffees at work or while running together at the gym, and eventually they became one of, if not the, primary relationship in your life. Even if he was still spending a lot of time with you and the sex was still fantastic, if his mind is constantly on another woman, that does not bode well for the two of you. Don't be surprised if he suddenly has a new relationship not too long after the break-up. This is a clear sign he had been emotionally cheating.

Your Values Don't Align
Shortly after I finished working on the Obama campaign I met a lovely lady and she turned out to be a Republican. As die-hard liberal as I may be, she was just as far right-leaning. We knew not to talk politics because we would end up in a fight. We made it six months before the simple fact that we have drastically different values became too hard to ignore. Yes, there were other issues in the mix, but in my heart I always knew I couldn't settle down with her long-term because we didn't see eye-to-eye on a variety of issues. Which leads to the big one:

You're Not the One
If you're reading this and you're currently heart-broken I empathize. I've been on both sides of this talk, either not being "the one" for someone else or having to tell someone that I didn't see myself marrying them and settling down. Frankly, if you're in a long-term committed relationship and someone sits you down and says they realize they "should" want to be with you forever because you're so great, but that in their gut they know that's not true for them, count it as a blessing. It's better to hear that earlier rather than later. Even if nothing is wrong in the relationship, that's an indicator that there is nothing so right that he would want to be with you forever. And someone else will, I promise.