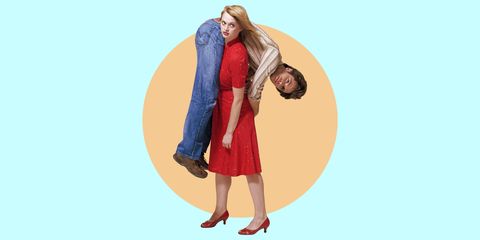 The next time you see a guy fiddling on his phone while crossing the street against heavy traffic, let him go. (Not really...but maybe). You can blame it on Karma: According to a new study published in the journal Evolution and Human Behaviour, men don't find women who act "heroically"—like, soldiers in the army—sexually attractive.

Resist the super tempting urge to punch a hole in the wall next to you until we explain. Researchers from the University of Southampton in the U.K. recruited 159 women and 181 men and showed them profiles of soldiers performing brave acts—such as fighting in combat or help victims during a natural disaster—you know, going above and beyond the line of duty. Women got all hot and bothered by the men in these situations; men were not turned on by the females.

Study authors suggest history is the root of this attraction—men have been known to be the more physically and psychologically stronger species (ahem). So, how do they recommend you take this information? "In light of the physical dangers and reproductive risks involved, participating in intergroup aggression might not generally be a viable reproductive strategy for women," they say in a press release. Reproductive strategy? Feel free to go punch that wall now.

Few things here: 1) STFU, 2) #sorrynotsorry for saving your lives, and 3) When it comes to heroism and strength, women are just as fearless and courageous as their XY counterparts. End rant.

This content is created and maintained by a third party, and imported onto this page to help users provide their email addresses. You may be able to find more information about this and similar content at piano.io
Advertisement - Continue Reading Below
More From Love & Sex
Satisfyer Vibrators Are Under $40 for Prime Day
Real Women Share Their Favorite Sex Positions
Advertisement - Continue Reading Below
Swipe Right on Privacy
My Abuser Cyberstalked Me
The All-Time Best Vibrators, Reviewed by Experts
Behold: A Sex Playlist That Won't Make You Cringe
The 60 Best Cheap Date Ideas
Second Date Ideas That Aren't Cliché
The Best Dating Apps for People Who Hate Them
20 Ways to Be a Better Kisser