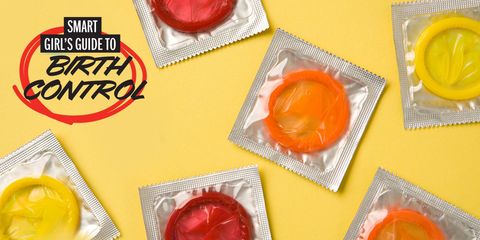 Throughout my teenage years, condoms seemed unsophisticated, even downright silly: a rubber penis hat kept in men's wallets, pulled out under cover of night for furtive acts. In college, I went on the Pill and only slept with committed boyfriends. Later, I experimented with condoms, but fumbling through a drawer, ripping the package open, and then goofily putting it on left me red-faced—not in a good way—and could divert a boner entirely. The Pill, by comparison, was gloriously seamless and under the radar.

I stayed on the Pill for some 15 years. And while I never got pregnant, I did worry about blood clots. There was a tiny risk, my gynecologist said, but suddenly it was all I could think about on long plane trips. Then there was the matter of accountability. I'd occasionally been lazy about insisting that new partners be tested before sex, because I knew them, they knew me, we were both fine, and, anyway, the Pill was there to keep me from getting pregnant.

But after going off the Pill, I needed to make sure there was a condom every time I had sex—each rubber penis hat a symbol of not only the sex I was having, but how I was actively taking care of myself as I did so. Nothing was hidden, and that felt freeing. Another unexpected benefit: how handy condoms are to clean up. Just use and toss! And, if so inclined, pull out another and repeat.

"Unlike with the Pill, the guy had to be involved, too—our protection was a matter of mutual responsibility."

Going from the Pill to condoms didn't change my body, but I did feel more in touch with myself. Ironically, it seemed that a layer of distance in my couplings had been lifted. Unlike with the Pill, the guy had to be involved, too—our protection was a matter of mutual responsibility. Talking about birth control with partners ("Do you have a condom? No, do you?") was itself embedded with a kind of intimacy, the process varying according to the individual. it could be revelatory: The men who would try to have condom-less sex could be crossed off the list immediately. The ones who came prepared were respected. Those who admired me for having my own condoms, even more so.

It's true that "Do you have a condom?" is probably not the sexiest whisper to ever hit an ear. There are so many things that we prefer to remain unspoken, particularly when we're naked in the bedroom. But putting everything out there— starting with a very visible condom—has been a valuable lesson in owning my own sexuality. I don't laugh at condoms anymore. Walking into a drugstore, coolly staring down an aisle of Trojans, selecting the biggest box, and checking out without a blush can make a person feel pretty damn in-control. And what's hotter than that?

This article is a part of a week-long series on birth control.
See the rest here.

A version of this article appears in the June issue of Marie Claire, on newsstands May 19.