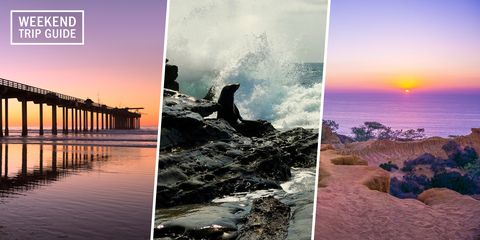 Welcome to MarieClaire.com's series on weekend travel—a smart girl's guide to making the most of those glorious two days off.

La Jolla means "the jewel," and the Spanish settlers of the 1700s were not overstating things when they gave that name to a stretch of California coastline just north of downtown San Diego.

The clear Pacific water and epic waves at spots like Black's Beach, WindanSea, and Bird Rock have made La Jolla a homing beacon for surfers, but thanks to seven solid miles of ocean bluffs and sandstone cliffs, any outdoorsy type will feel at home here. And in town, you'll find incredible architecture, boutique shopping, and trendy restaurants—like a less scene-y Malibu. La Jolla is a small town, which makes it easy to pack everything you want to do into a quick weekend trip. Here's where to start planning.

While you don't have to have a car to get from LA to San Diego (there's a 3-hour train and Uber could take care of the rest), you will want one in order to truly enjoy everything La Jolla has to offer. Not to mention, the drive down Route 5 is stunning. You could do it it under three hours, but it's worth taking your time to stop in some of the beautiful towns along the way, like San Clemente or Encinitas (I highly recommend a lunch break at the the open-air Bier Garden of Encinitas).

I got to drive the revamped Chevy Traverse, which has so many amenities it made sitting in LA traffic feel like NBD: Apple CarPlay/Android Auto (so you can text hands-free), a 4G LTE wi-fi hotspot (so you're draining your data with Spotify and GPS), and a enough legroom to comfortably fit 8 people (plus, you can fold down the third row of seating to make extra space for luggage—or surfboards, if that's your thing).

Southern California is home to some of the priciest real estate in the U.S., but you don't need the salary of a Texas oil magnate (cough, this guy) to visit. I stayed at the Estancia La Jolla, which is technically tucked between La Jolla and Del Mar, but less than 10 minutes from town. The hacienda-esque property is a favorite for weddings, which is no surprise once you take in the 10 acres of bougainvillea, olive trees, and other greenery (it was once an equestrian farm). There's an on-site spa where you could splurge on an outdoor massage or a spirulina wrap, but, honestly, you'd do just as well lounging at the saltwater pool and sipping on complimentary fruit-infused water.

If you're not into the hotel thing, Airbnb and HomeAway have tons of listings, from beachfront "shacks" (I use that word lightly, because this is La Jolla we're talking about) to luxury villas.

Let's start with the obvious: surf. The San Diego area is home to some of the best breaks in California, like the aforementioned Black's Beach, WindanSea, and Bird Rock, and surfers come from all over the state to catch the swells. But if that's not your thing (or you just get sick of watching, which, understandable), you can still get your water fix. The guys at La Jolla Bike and Kayak Tours will take you ocean kayaking through the La Jolla Ecological Reserve, with some extra paddling through seven of La Jolla's famous sea caves. It's also one of the best ways to get up close and personal with the area's most majestic residents: the sea lions of La Jolla Cove.

La Jolla is also home to the Torrey Pines State Natural Reserve, with 2,000 acres of coastal park for hikers (or people looking for the best Instagram backdrop) to explore. But it is a reserve, not a park, which means you have to stick to the 8 miles of approved trails. There's still plenty to see, including bobcats, coyotes, and even whales during migration season. And if you look down toward Black's Beach, you'll get an eyeful of people enjoying the surf in the nude.

For those who prefer to spend the day on the shore, meander down to Shell Beach, less than half a mile from La Jolla Shores Park (BTW, that's where you'll go to check out the sea lions from land). The name is a little bit of a misnomer—you won't find a ton of shells, but if you pick your way carefully through all the rocky crevices (it's slippery AF after high tide), you'll see tons of crabs, tiny fish, and maybe even a starfish or two. Pro tip: This area is way quieter than the super touristy park.

If you're into dining with a view, there are two restaurants you have to hit up: George's at the Cove and Eddie V's. Both restaurants have terraces with incredible ocean views; the only drawback is it's so pretty, the photos make it look you're eating against a green screen. (FWIW, I'd pick George's for the food — maybe even just for the avocado toast.)

Blue skies, umbrellas and sunshine. This is what #EatOutsideDay was made for. Is it lunchtime yet? (📸 @bi_ente) #GeorgesOceanTerrace

For two SoCal staples, Cali-Mex and seafood, stop by Galaxy Taco and El Pescador Fish Market, respectively. The former is pricy, but you can get some more exciting combos, like Baja fried fish tacos or grilled avocado tacos; at the latter, ordering a cup of the clam chowder is non-negotiable.

1. The best spot to catch the sunset in La Jolla is over by Bird Rock. I'd suggest heading there early (you can pass the time exploring the tide pools) to get prime views and parking, which is seriously limited. You can also take the short walk over from La Jolla Shores Park.

Southern California will look nothing like this tonight. @derekdunfee's PhotoLyfe is live on Stabmag.com. Head to the site for more of the big wave surfer's lenswork.

2. Don't be intimidated by all the surfers who look like they've been riding waves since before they could walk. Even newbies can get on the board here. Sign up for beginner lessons at Surf Diva Surf School, the first all-girls surf school—they offer daily 1.5-hour classes (FYI, they're co-ed now).

3. If La Jolla feels a little too sleepy for you, know that you're just 20 minutes north of downtown San Diego. Drive into the city for chicken and eggs and bocce ball at The Crack Shack, fancier patio dining at their sister restaurant, Juniper & Ivy, or beers right across the street at Ballast Point Brewery. Or spend the day trekking through the 1,200 acres of San Diego's Balboa Park, visiting the 3,700 animals at the San Diego Zoo, and cheering on the Padres at a home game.

Ashley Mateo Ashley Mateo is a writer, editor, and UESCA-certified running coach who has contributed to Runner’s World, Bicycling, Women's Health, Health, Shape, Self, and more.
Advertisement - Continue Reading Below
More From Travel Guides
An Instagram Travel Guide to Basque Country
The Ultimate Catskills Winter Getaway
Advertisement - Continue Reading Below
The Instagram Guide to Dublin
The Instagram Guide to Tokyo
Travel the World Without Begging for More PTO
How to Elevate Your Airport Style
Everything Worth Doing During a Weekend in Denver
Embrace Your Inner Witch in Salem, Massachusetts
The Best Places to Explore In Dreamy Dubrovnik
Channel Fall Vibes in the Catskills