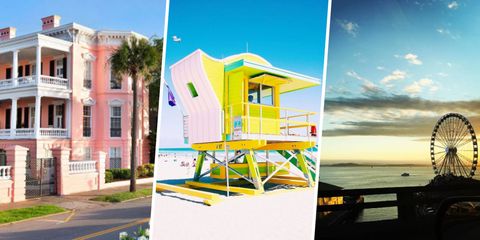 With massive parks, outdoor piazzas, rooftop bars overlooking the sun-soaked downtown, and beaches, lakes and ponds outfitted with wildlife, you don't have to leave the U.S. this summer to get a Discover-page-worthy 'gram. From Boston's new Greenway Park to Miami's sparkling coastline to Seattle's bustling Pike Place Market, there are a million and one reasons to stay stateside and explore the outdoor havens that make these cities so darn picturesque. Whether you're coming from near or far, these are America's most Instagrammable destinations. (After one peek, you'll easily see why). 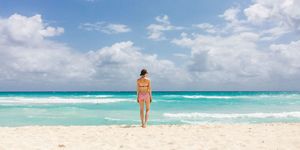 Visit the link in our profile to discover our 4-day Holy City Honeymoon itinerary. Check into @hvicharleston then spend the day both at land and sea, setting sail aboard the @schoonerpridechs, making your own culinary dishes at @zerogeorgest and dining out on the town! #TravelTuesday #ExploreCharleston

Quintessential Southern charm, candy-painted historic mansions, horse-drawn carriages, and streets flanked with centuries-old, moss-laden oaks—it's no wonder Charleston, South Carolina has long been fabled as one of the South's most beautiful cities. Although the town is often flooded with visitors, there are plenty of beautiful shots to be captured in and around the old city market, down the cobblestoned streets of downtown (like Church Street and Chambers), along the Battery, or near the Waterfront Park's iconic pineapple fountain. Beyond downtown, the neighboring areas of James Island (home to the famed Angle Oak), Isle of Palms (with its miles of beaches), and West Ashley's famous plantations (think Middleton Plantation and Magnolia) make for scenic shots—especially during sunset. 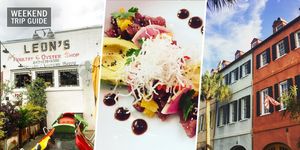 From the inspiring and captivating sunsets hailing over Fenway Park to the sprawling Greenway Park (and its whimsical carousel) to Beach Hill's famed Acorn Street's townhouse-lined cobblestoned streets, the city of Boston is an Instagrammer's dream come summertime. Of course, there's far more than just these big sights that'll make your followers swoon. For fewer crowds but just as pretty a pic, head to Charlestown's abandoned train car, the Mary Baker Eddy Library (where you can wander through a giant painted globe), or the secret garden that currently occupies the top of a parking garage in Cambridge.

Have you ever added sno-caps into a bag of fresh hot movie popcorn? It's very messy, and very delicious. So is the bean when it snows--in my opinion, it's one of the most beautiful things to view in Chicago. I'm @chippercentral, none of the photos I posted today were taken anytime recently, but it's #TBT, so it's all good! I'm finishing up #TakingOverChooseChicago tomorrow, @chippercentral, now craving gooey melted chocolate on popcorn, signing off for the evening. #mychicagopix

Known the world over for its iconic architecture that's a mix of both modern and historic, Chicago's skyline is one of the most recognized in the world. Aside from the famous Cloud Gate (AKA the Bean), Millennium Park, and the towering John Hancock building, the city is actually home to a million other landmarks, sights, and quirky neighborhoods that beckon a VSCO filter. For quirky street art and a collection of the city's most eccentric locals, visit Wicker Park's "hipster highway" (AKA Milwaukee Ave.) and stop into the Handlebar restaurant or the Wormhole coffee shop, which is home to an actual replica DeLorean. Not as crowded as Millennium, but just as picturesque is Lincoln Park, which spans 1,208 acres and overlooks Lake Michigan. Skip the fabled golden hour and hit the lakefront at sunrise to get a stunning view of the downtown skyline—without having to fight for a spot.

If you're looking for premium #content, head over to La Jolla, the hilly seaside town that sits on the border of San Diego. No matter where you wander, you're going to find something worthy of your feed, whether it's the famous "what's your favorite color" mural that sits on Eads Ave., the bold and bright flower fields of Carlsbad Ranch, or the coastal views found at the Sunset Cliffs, which is best visited—you guessed it—at sunset. A town boasting more street art than many others in California, you'd be remiss not to spend time soaking up the many examples that make up the Murals of La Jolla project. 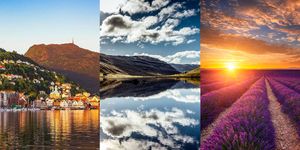 Miami Beach, where even lifeguard stands are works of art. #FoundinMiami

There are few places that are as iconic on social media than Miami, with its famed art deco buildings looming on Ocean Drive in South Beach, the bikini-packed beaches lining the sparkling Atlantic Ocean, Little Havana's domino players and mouthwatering Cuban sandwiches, and the vibrantly painted buildings of Wynwood. For photos that won't need a filter, head to the last location and spend an hour or so snapping your way through the trendy neighborhood's painted alleyways. For one of the best views of the city, skip South Beach in favor of East Miami's rooftops, which offer stunning views of the ocean, the downtown skyline, Virginia Key, and the Vizcaya Museum and Gardens. For a more unexpected shot (and to test your phone's new slow shutter app), head to the Best Buy garage on fifth and Alton for some prime time-lapse photo opps.

If you spend any amount of time scrolling through Instagram's most popular posts, you're going to find at least two, maybe three, images showcasing some part of Seattle's iconic geography. Although many flock to the Space Needle for sweeping views of the city or into the bustling Pike's Place Market, there's actually an astounding array of places a little more off the beaten path that are just as likely to boost your followers. A snap of Paramount Theatre pairs well with the Gingham filter, for example. And for a view of the city made famous by 10 Things I Hate About You, go to Kerry Park at dusk to see the Space Needle and surrounding buildings sparkling at night. The EMP's strangely curved metal exterior (that glows in the sunlight) makes for an epic addition to your Insta Stories. However, if you're feeling a little basic, grab a frap and take a #foodintheair shot in front of the original Starbucks on 1st and Pike.

A post shared by KennebunkportMaine (@kennebunkportmaine) on Mar 2, 2017 at 4:01am PST

When people think of swoon-worthy Maine towns, Kennebunkport is almost always top of list. For one, this coastal seaside escape boasts presidential pedigree, being the home of the Bush family. Although it doesn't often the quirk of neighboring Portland, it does offer ample beauty perfect for sharing. The shops, like Farm + Table, boast artisanal crafts wrapped in beautiful packages and nautical-inspired pillows, blankets, and the like, while the restaurants offer enough bright red lobsters and mayo-laden lobster rolls for creating the ultimate #foodporn shot. You'd be remiss not to at least visit Gooch's beach (home to Bennet's famous sandwich shop) or have your best friend snap a lifestyle shot of you paddle-boarding into the sunset in front of Cape Porpoise Lighthouse. 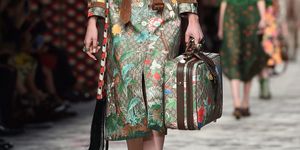 The 10 Best Suitcases According to the Internet

Such a beautiful capture of King Street! Can you spot one of our go-to coffee shops? : @my_name_is_rei #ExtraordinaryALX

Founded in the 1700s, Alexandria is easily one of Washington D.C.'s most famous suburbs. Touting cobblestone streets, a beautifully restored dock nestled on the Potomac, and pastel row homes on Queen and Prince Streets, nearly every block brings a shot you just have to capture. (Hurry and you could catch the cherry blossoms and magnolia trees that are in full bloom around Waterfront Park.) If you're a foodie, head to King Street on Saturday to capture the area's fresh produce. Beyond the main streets of King, Queen, and Prince, the iconic trolley makes for great Instagram fodder (especially during the evening). For engagement shoots or lifestyle shots, you can't beat the brick Court House, which sits right on King Street, or the whimsical Old Town Riverboat.

Advertisement - Continue Reading Below
More From Travel Guides
An Instagram Travel Guide to Basque Country
The Ultimate Catskills Winter Getaway
Advertisement - Continue Reading Below
The Instagram Guide to Dublin
The Instagram Guide to Tokyo
Travel the World Without Begging for More PTO
How to Elevate Your Airport Style
Everything Worth Doing During a Weekend in Denver
Embrace Your Inner Witch in Salem, Massachusetts
The Best Places to Explore In Dreamy Dubrovnik
Channel Fall Vibes in the Catskills