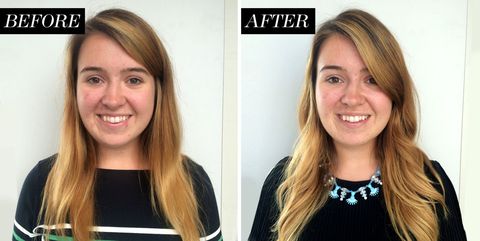 When entering your 20s, you expect to grow out of certain things—braces, food pickiness (veggies are actually kind of good), and your propensity for boy bands. (Okay, maybe not the last one.) Unfortunately for me, two major problems still linger: my blemish-prone skin and my undying love of sugar.

To be honest, I've never had amazing skin. I started wearing foundation and concealer at the ripe age of 13 and have rarely taken a break from the daily routine since. It was easy to feel self-conscious when so many of my close friends were gifted with clear complexions, never having to wear a drop of makeup in an attempt to shield imperfections from the ever-present judgment of middle school girls.

But while my skin has slowly improved over the years, I've begun to notice a change for the worse over the past few months. Redness and shine? Welcome back. Breakouts? Oh, cool, you're here, too. I began questioning what I was doing differently that could possibly be causing Acne Nightmare 2.0. As I contemplated this while staring into a glass case of beautifully decorated cupcakes at Magnolia Bakery, it dawned on me: I've been eating way more sugary foods than usual.

Since moving to New York City, I've indulged in all the buzzworthy sweets—the cronut, Dough doughnuts, Ladurée macarons, Georgetown cupcakes, gelato from Little Italy, and a questionable amount of bizarrely great cookies from our office's cafeteria. I began to rationalize my sugar-laden choices: "A sweet a few times a week is perfectly acceptable," I'd think. "I'm walking so much now that I'm in the city," I'd tell myself. "It's been a hard day, I deserve it," I'd say as I ate *all* the snacks. But with every sweet I took down, I began to notice that a few new marks popped up on my face.

The American Heart Association advises that women consume no more than six teaspoons of sugar daily, which equates to roughly 100 calories. Some of the sweets I was indulging in accounted for a full day's serving of sugar. And I never thought twice about it.

So I decided to go straight to an expert. Besides the usual health suspects (obesity and diabetes), sugar can screw over your skin. Dr. Carl Thornfeldt, a dermatologist with over 30 years of skin research experience, says sugar has two major effects on skin—it activates inflammation and binds to the collagen to make the skin stiff. He says any processed sugar is too much, and can eventually cause long-term damage because of chronic inflammation.

He suggested that if I reduce my intake by two-thirds, then I could see a decrease in inflammatory acne lesions and redness by as early as six days. Translation? Less sugar = better skin. Motivated and ready for a change, I set goals for what felt like it would be the longest week of my life. I would eat absolutely no processed sugar for seven days—with the hope that I would live to tell the tale (with amazing skin to boot).

Walking into work without makeup on to take my inaugural cleanse photo was horrifying enough, but it was extra terrifying considering I had a breakout the day before around my lips and cheeks. There was simply no way to hide it. Ditching sugar for the day was not too hard considering I had my fair share the day before. I just tried to keep busy and avoided snacking or walking past the vending machine at all costs.

Black coffee just doesn't taste the same as a Starbucks caramel macchiato, but it had to do. I was definitely struggling halfway through the day and wanted to so badly buy chocolate or anything to satisfy my sweet tooth, but held on through work.

Oddly enough, today was the first day in a very long time that I didn't feel the afternoon crash I usually go through where I become groggy around 4 p.m. Though I was still craving sugar, I felt liberated. My roommate even commented on my endless energy that day, as I was begging her to run around the city with me after work—which was, let's just say, not a usual request.

"My roommate even commented on my endless energy that day, as I was begging her to run around the city with me after work."

A Saturday at the beach doesn't seem complete without a Firecracker Popsicle and a drink in hand, but I sipped on lemon water and enjoyed a day jumping in the waves regardless. Later at home while making salad and chicken for dinner, I realized how much healthier I was eating because I was watching my sugar intake.

After reading the labels on nearly everything I picked up in the grocery store, I was appalled by how many packaged foods, sauces, and "naturally flavored" drinks had added sugar in them. I was forced to buy everything fresh and make meals from scratch. It was more work, but it was rewarding knowing that what I was putting in my body was good for me and untainted by processed—albeit delicious—crap.

Never get a craving for cereal when attempting this experiment. Every single box of cereal in my local grocery store had some form of sugar in it—cane sugar, syrups with names I couldn't pronounce, brown sugar, you name it. After reading the labels on everything from Cheerios to Chex, I finally found a seven whole grain puffs cereal by Kashi that tasted extremely bland, but did the trick when paired with bananas and blueberries.

Today is when I really began to notice a definite change in the way my skin looked. Though I was a little sunburnt under my eyes from the day before, my bumps and scars were a little less visible than they were the past three days. The breakout around my lips had diminished significantly, and I was beginning to think maybe this could work for me after all.

"Every single box of cereal in my local grocery store had some form of sugar in it—cane sugar, syrups with names I couldn't pronounce, brown sugar, you name it."

Because this day was entirely spent cleaning and getting ready for my friends who were coming into the city to see a concert with me the next morning, I barely had time to think about food. Quick cereal, salad, and homemade pita pizzas were about all I had time for.

After the concert, my friends insisted we go to Sprinkles Cupcakes. This was sheer torture. I was so close to the finish line but all I could envision was me finishing a giant peanut butter banana cupcake in all its sprinkle-coated glory. I watched my friends down their cupcakes as I shed a few internal tears. At least I felt like I was having a pretty good skin day—no new breakouts had emerged over the past few days and I was thrilled.

I woke up pleasantly surprised. Sure, my skin wasn't 100 percent perfect—I'll always have scarring and dark spots from past breakouts, but my skin looked renewed. The overall redness of had gone away and there was a brightness that hadn't been there before. I felt like I was glowing from the inside out. My body felt better and less sluggish from the ups and downs of sugar crashes and my breakouts were gone.

I'm proud of myself that I was able to make it seven days without sugar, but I know it is not something I can quit entirely forever. I just love it too much. That being said, it has been a few days since I stopped the challenge and I am still keeping my sweets to a minimum because I am happier now with the way I look and feel. I've learned over the week that having a balance and setting limits for yourself is important and truly worth it, even if that does mean skipping the free cupcakes at work every once in a while. (But not all the time. Balance, you guys. Balance.)

This content is created and maintained by a third party, and imported onto this page to help users provide their email addresses. You may be able to find more information about this and similar content at piano.io
Advertisement - Continue Reading Below
More From Beauty
Lengthening Mascaras for Your Longest Lashes Ever
A User's Guide to Sunscreen Expiration Dates
Advertisement - Continue Reading Below
Fenty Beauty's First Perfume is Intoxicating
Pore-Cleaning Devices for Playing Dermatologist
A Definitive Guide to Essential Oils for Your Skin
For Sharon Chuter Self-Care Includes Champagne
The Absolute Best Red Lipsticks on Earth
Our Favorite Self-Tanners for Dark Skin Tones
Top-Rated Dip Powder Nail Kits to Experiment With
Go Platinum Blonde Without Destroying Your Hair