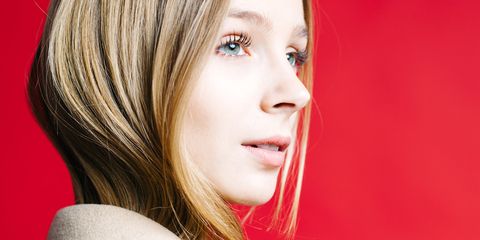 What if I were to tell you that you could tighten your skin, soften your fine lines, and give your face the overall appearance of a dewy 22-year-old who's spent her life living in a bubble? Oh, and it would only take 20 minutes? And oh, there would be virtually zero side effects or downtime?

You’d probably call me a liar or a witch, and honestly, both would seem correct, because this technology shouldn’t exist. And yet, thanks to the modern world and the FDA, it does now in the form of a little device called TempSure Envi.

TempSure is a heating device that emit radio frequency waves (don’t worry; they’re safe) deep into your dermis to stimulate collagen production. “It tricks your body into thinking it’s been injured, so your body will send growth factors to the area to build new collagen,” says dermatologist Arash Akhavan, M.D., founder of Dermatology and Laser Group in New York City. “That leads to firmer, tighter, less-wrinkled skin.”

The device itself isn’t revolutionary—heating devices have existed in your dermatologist’s office for years (think Ultherapy, Thermage, Thermi, and Pellevé). Instead, what’s extraordinary about TempSure is the way in which the radio waves are delivered into your dermis. “Tempsure stimulates your nerves much less than with other devices, which means we can use a higher temperature without any pain, making it faster and more effective,” he says.

Dr. Akhavan is among the first dermatologists in the world to have a TempSure in his office (it’ll be rolling out to other dermatologists in the coming months), and he assures the very skeptical me of just how painless the treatment is. “I’ve tested it out on myself, and there’s really no discomfort—you just feel a warming sensation on your skin—and there’s absolutely zero downtime,” he says. “You could get it done over your lunch break, and nobody would even be able to tell.”

Another magical thing about the procedure: The whole thing is over pretty quickly. Though the treatment time depends on area size, Dr. Akhavan says most places (like the full face, the full abdomen, above the knees, and behind the thighs) take 20 minutes each, with results seen almost immediately. “You’ll see some tightening effects after your first treatment, though the real improvements set in after four-to-six weeks,” he says.

Annoyingly, you do need more than one treatment—four treatments total, spaced every two-to-four weeks, depending on what you’re getting done—but the results are permanent. “The collagen that you generate from TempSure is permanent, though it won’t prevent gravity’s natural toll, which is why we recommend a touch-up session every six months or once a year,” he adds. But, of course, that's totally optional, if you feel like chancing it.

“It’s a big leap in technology, in terms of results and comfort,” says Dr. Akhavan. “It’s truly the most-effective face lift and neck lift that doesn’t require surgery, Botox, or retinol.” The only downside? It ain’t cheap.

Prices vary, depending on where you live, who you see, and what you get done, but you can expect to pay between $2,000 and $4,000 for a set of four treatments. Still, if you’re looking to amp up your skin, and you’ve got some money to burn, why not immediately book a dermatology appointment? Excuse me while I go book mine.

Chloe Metzger Deputy Beauty Director Chloe Metzger is the deputy beauty director at Cosmopolitan, obsessively writing about new makeup launches, the best hair products (curly girl here; whattup), and the skincare formulas that really work for every skin type (follow her on Instagram to see behind-the-scenes pics of that magazine life).
This content is created and maintained by a third party, and imported onto this page to help users provide their email addresses. You may be able to find more information about this and similar content at piano.io
Advertisement - Continue Reading Below
More From Game-Changing Beauty
At-Home Teeth Whiteners That Work Wonders
The Best Vitamin-Packed Beauty Products
Advertisement - Continue Reading Below
Behold: The Perfect Lipstick for Lipstick Haters
Do CBD Bath Bombs Really Work?
Watch This Stamp Liner Give Me a Perfect Cat Eye
Meghan Markle's Wedding Makeup Is Super Chill
I Spent a Day with Beyonce's Makeup Artist
Jennifer Lopez Has a New Makeup Collection Coming
The Easiest Contour Tutorial You'll Ever Try
The Biggest Beauty Trends of the 2018 Oscars