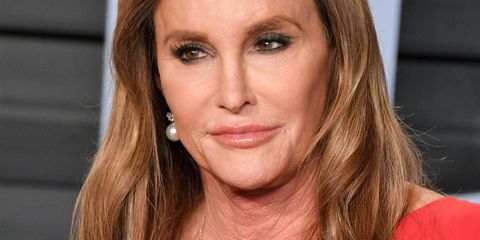 The 68-year-old posted a photo of herself on Instagram Tuesday with the tip of her nose looking blood-red and incredibly raw. The caption on the pic: “I recently had to get some sun damage removed from my nose. PSA- always wear your sunblock!”

Though Jenner is careful to call it “sun damage” rather than cancer, People has confirmed that what Jenner had removed was actually cancerous basal cell carcinoma—the most common form of cancer in the United States, according to Yale dermatologist Mona Gohara, M.D.

“It’s usually not deadly, but it’s often disfiguring if left untreated,” says Dr. Gohara to MarieClaire.com. Yes, it’s scary, but thankfully, basal cells are relatively easy to spot on your own nose, as long as you’re paying attention. “A basal cell can initially look like a flesh-colored bump that’s not going away, or a pimple that keeps breaking open and not healing, or a waxy bump that's pigmented or brown,” she says.

But a diagnosis of basal cell carcinoma doesn’t automatically mean surgery. “If it’s superficial, you can use a chemotherapy cream for about six weeks to kill the cancer, which will leave the skin super red and irritated,” says Dr. Gohara. “Otherwise, we send patients to skin-sparing surgeons who specialize in removing cancers from small areas, like the nose.”

Of course, your skin cancer risk can be highly mitigated by wearing sunscreen of at least SPF 35 every single day (though nobody is 100 percent safe, since you can’t totally protect yourself from all UV light).

And if your initial reaction is “ugh, but sunscreen is so sticky/heavy/pore-clogging/annoying,” then you clearly haven’t tried Japanese sunscreens, like my favorite Biore Sarasara Aqua Rich Watery Essence SPF 50+/PA++++, which truly melts into your skin like water and feels like absolutely nothing after you spread it on.

Either way, just make sure you’re slathering something on your skin every day—and if you won’t listen to me, then I hope you’ll at least listen to Caitlyn Jenner.

Related Story
The Best Sunscreens to Layer Under Foundation
Chloe Metzger Deputy Beauty Director Chloe Metzger is the deputy beauty director at Cosmopolitan, obsessively writing about new makeup launches, the best hair products (curly girl here; whattup), and the skincare formulas that really work for every skin type (follow her on Instagram to see behind-the-scenes pics of that magazine life).
This content is created and maintained by a third party, and imported onto this page to help users provide their email addresses. You may be able to find more information about this and similar content at piano.io
Advertisement - Continue Reading Below
More From Trending Beauty
I Tested Meghan Markle's Top Beauty Products
Glitter Pumpkin Butts Are a Thing for Halloween
Advertisement - Continue Reading Below
Behold: The Self-Tanner Fail to End All Fails
This Is Pinterest's #1 Halloween Makeup Idea
These 3 Products Cured This Woman's Acne
Princess Eugenie Just Dyed Her Hair Bright Red
13,000 People Swear By This Eye Cream
Post Malone Cut His Hair and Looks Unrecognizable
Shay Mitchell Will Only Use This One Concealer
People Are Freaking Out About Emma Stone's Hair