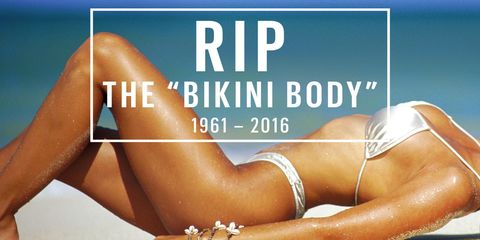 You've seen it, whether you've really noticed it or not—the sudden infiltration of all your social media feeds with "every body is a bikini body" messages. Empowering movements like the #ShowMeYourBawdy Instagram photo challenge (which features the tagline "Because your body is ready for summer. Just as it is.") have bubbled up to mainstream media and spilled over to your friends' Facebook pages, where everyone is, in unison, rallying around the cause: The idea that only one kind of body is appropriate to be seen in a bikini is complete and total BS.

Celebrities, magazines, and governments are even on board—Hilary Duff recently told Today.com that she "doesn't care to look absolutely perfect in a bathing suit," and fitness glossy Women's Health has gone so far as to ban the term "bikini body" from its pages. London's Mayor, Sadiq Khan, recently called to ban ad campaigns that promoted "unhealthy or unrealistic" body images. Her first focus? The notorious a weight-loss ad campaign featuring a thin bikini-clad model that read: "Are you beach body ready?"

is the "bikini body" history? Have we finally evolved beyond it?

Fat-shaming—once a niche term in the feminist blogosphere—is now not only on every woman's radar, but it also now has impactful consequences. In May, Facebook was pressured into publicly apologizing to Cherchez la Femme, an Australian group that ran an ad for an event called "Feminism and Fat" featuring plus-size model Tess Holliday in a bikini, for initially banning the photo because the image represented "body parts in an undesirable manner." Yes: Cue uproar.

#FatAndFlossy hope everyone is enjoying their Memorial Day and honoring those that serve! Wearing this @simplybeusa high-waisted bikini in Atlantic City with absolutely NO SHAME. #30daysofNoShame #EveryBodyIsABikiniBody #BIkiniADay

So...is the "bikini body" history? Have we finally evolved beyond it? The term is, after all, 50 years old—and invented by advertisers to sell weight-loss products.

According to a detailed report from The Cut, the term "bikini body" was first used in a 1961 weight-loss campaign by the company Slenderella International. The ad, which ran in the New York Times and the Washington Post, read, "High firm bust—hand span waist—trim, firm hips—slender graceful legs—a Bikini body!"

"I'll wear a bikini if I damn well please."

As women's bodies in swimsuits have become literally commodified—to be consumed in media by an audience—the aesthetic has shifted accordingly. But that's the real message of the recent pushback: My body is not here to be consumed by you. I'll wear a bikini if I damn well please.

The fight is, of course, far from over—straight size is still the dominant ideal in our culture. But the rise in bikini democracy spells a better way forward, and goes hand in hand with the growing fat-positive body movement that author Lindy West has written about in her new memoir Shrill. "The 'perfect body' is a lie," she writes. "I believed in it for a long time, and I let it shape my life, and shrink it."

Here's to no more of that.

Hayley Krischer Hayley has written for The New York Times, The New York Times Magazine, Refinery 29, Racked, Talking Points Memo, The Hairpin, and more.
Advertisement - Continue Reading Below
More From Beauty
Facts to Know Before You Get a Keratin Treatment
The 3 Lipsticks I Have In Rotation Right Now
Advertisement - Continue Reading Below
Why Using a Product With Peptides Is Worth It
Created for From Marie Claire for Created by Marie Claire for
StriVectin Peptight
Line Edit: Eyeliner Trends That Are High Drama
Black-Owned Beauty Brands You Need to Know
The Body Lotion Your Dry Skin Has Been Craving
Know the Signs That Your Makeup Has Expired
Kendall Jenner Has Rapunzel Hair On 'Garage' Cover
WORTH IT: Royal Fern Skin Perfecting Essence
Blonde vs. Brunette: Celebs Who Made the Switch