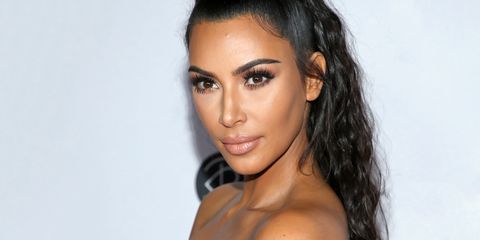 In case you’ve been living under a rock in the middle of a cave in '63, you’ve probably heard that Kim Kardashian recently launched a bunch of new KKW fragrances, all inspired by her Kimojis.

And though the most, uh, visible aspect of the launch has been the photo Kim Instagrammed this morning of the Kimoji Peach Perfume balancing on her butt (as one does), there’s a shadier side to the story—namely that Kim is being sued for alleged plagiarism of her new fragrance. (People reached out to Kim's team, but had not received a response as of press time.)

According to The Blast, which first reported on the lawsuit, a marketing company named Vibes Media is suing Kim K for allegedly stealing their logo for her new KKW fragrance that's also called Vibes.

Vibes Media claims they trademarked the logo in 2012, and that Kim “has been marketing, promoting, and is now selling a Vibes perfume. The Vibes perfume comes in a bottle that is a close facsimile of the Registered Vibes Logo." Vibes Media is apparently asking for all of Kim’s unsold perfumes to be destroyed, and is also seeking damages, according to TMZ. Kim has not publicly responded to news of the lawsuit.

Kim’s new fragrances, which have reportedly earned her $1 million a minute in sales yesterday (yes, that’s crazy), come in Kimoji Peach (shaped like a peach), Kimoji Cherry (shaped like, duh, a cherry), and Kimoji Vibes (shaped like a black speech bubble with the word “VIBES” written across it).

The logo for Vibes Media, meanwhile, is a blue speech bubble with the word “vibes” written on it, as seen in this pic from their Instagram account.

Our employees are writing their name and the date of their appointment to celebrate National #CallYourDoctorDay. The board is growing by the hour! We’re partnering up with @bebrightpink to help you see your healthcare provider as a trusted partner AND schedule your well-woman exam.

Considering a picture says 1,000 words, I’d say her Instagram has spoken for her.