If you almost scrolled past Ariana Grande's latest Instagram photo without noticing it was really her, I don't blame you. The singer was hardly recognizable without her trademark ponytail (that, and there was a bunny filter over her face). Instead of having her hair tied back, Ariana rocked a lob, with the strands just barely grazing her shoulders. Our team's Slack channel was packed with questions: Is this a new haircut? How short was her extension-less hair? What does this mean for her ponytail??

The last time the star took off her lengthy extensions was back in September when she tossed a heap of hair onto the floor and said, "til next time" though, we didn't see her face then. Come to think of it, I don't know when or if I've ever seen Ariana with short hair, though she looks amazing with short hair. She didn't address the style change on Instagram and instead posted the caption, "This filter took my eyebrows away but I promise they’re there."

Her Twitter fans appear to love the hairstyle change, with one user writing, "a concept: ariana keeping her short hair." While we're not sure what exactly made Ariana say thank you next to her ponytail (she did just go through a rough breakup...), we won't question it. The lob looks great, Ari.

If you're inspired by the singer's lob, scroll through to see which other celebrities have also gotten this style. 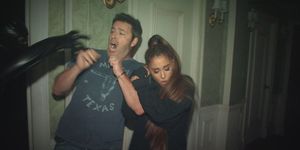 Ellen Forced Ariana Grande to Tour a Haunted House
Marina Liao Marina Liao is the fashion news editor at MarieClaire.com, where she covers celebrity style (from Meghan Markle to Katie Holmes), fashion trends, and shopping advice, plus conducts original interviews with industry insiders.
Advertisement - Continue Reading Below
More From Beauty
Hailey Bieber's Beauty Routine Is So Simple
Facts to Know Before You Get a Keratin Treatment
Advertisement - Continue Reading Below
The 3 Lipsticks I Have In Rotation Right Now
Line Edit: Eyeliner Trends That Are High Drama
Black-Owned Beauty Brands You Need to Know
The Body Lotion Your Dry Skin Has Been Craving
Know the Signs That Your Makeup Has Expired
Kendall Jenner Has Rapunzel Hair On 'Garage' Cover
WORTH IT: Royal Fern Skin Perfecting Essence
Blonde vs. Brunette: Celebs Who Made the Switch