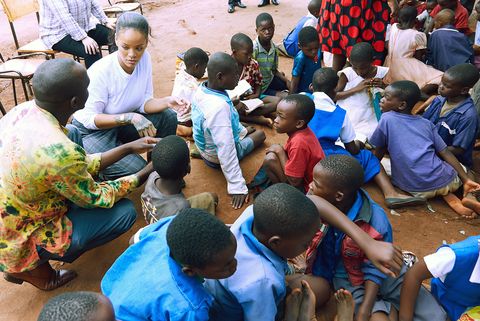 When Rihanna began developing her makeup line in 2015, she was adamant that she wouldn't launch until she had products to suit every woman. The result: Fenty Beauty was one of the first brands to offer foundation in a range of 40 shades. But making the isles of Sephora more inclusive is only part of the singer's mission for Fenty Beauty; she also wants to raise money for causes she believes in—and inspire others to do the same.

Rihanna and a patient at Clara Braithwaite Center for Oncology and Nuclear Medicine, in Barbados.
Marie Claire

Now, efforts toward that goal are underway with a new partner-ship between Fenty Beauty and the Clara Lionel Foundation (CLF). Rihanna started the non-profit in 2012, at a time when her late grandmother, Clara Braithwaite, was fighting a battle with cancer. "She was the most caring woman, very giving, very selfless. All the women in my family strive to be like her," Rihanna has said.

The singer herself is no exception. CLF (named for Clara and her husband, Lionel, Rihanna’s grandfather) supports charitable programs around the world, with a focus on education and emergency response. Since its inception, it has funded an oncology center at the Queen Elizabeth Hospital in the singer’s home country, Barbados; launched a micro-grant program in Barbados; and donated bicycles to girls in Malawi who need transportation to and from school.

In 2017, Rihanna traveled with CLF's executive director, Justine Lucas, to Malawi, where the foundation works with the nonprofit Camfed to provide scholarships to girls attending secondary school.

A student in Senegal, where the Clara Lionel Foundation is active.
Marie Claire

"We saw firsthand how this critical intervention helps girls avoid early marriage, early pregnancy, and HIV/AIDS," says Lucas. Many of the students who finish secondary school also go on to become entrepreneurs. Lucas remembers one example: "We met a wonderful young woman, Annie, who graduated opened her own restaurant, and is now able to support her entire family."

This month, CLF will get an influx of funds to help women like Annie as it continues its mission. Every September, Rihanna hosts the Diamond Ball, her annual fundraiser (last year's raised $5 million), and she's also donating the full sale price of each of her new highlighters to the foundation.

"We hope that this collaboration allows the Fenty Beauty community to feel not only like they're part of the CLF journey but also that they can take action on issues they are passionate about," says Lucas. "At the heart of our mission is the idea that everyone can play a part in creating a more just and equitable world by contributing in their own way."

This article appears in the September 2018 issue of Marie Claire.

Related Story
Shop Rihanna's Fenty x Savage Lingerie Line
Jennifer G. Sullivan Jennifer Goldstein is the former beauty & health director of Marie Claire and co-host of the award-winning beauty podcast Fat Mascara.
This content is created and maintained by a third party, and imported onto this page to help users provide their email addresses. You may be able to find more information about this and similar content at piano.io
Advertisement - Continue Reading Below
More From Makeup
There's a BB Cream for Every Single Skin Type
Brighten Up Your Nails With a Pretty Summery Color
Advertisement - Continue Reading Below
The Only Waterproof Eyeliners You'll Ever Need
The Nail Trends for Spring Are All About Optimism
Tinted Moisturizers to Leave Your Skin Glowing
Found: The Best Eyebrow Brushes for Every Look
Editor-Approved: The Best No-Streak Self-Tanners
Lip Balms That'll Save Your Dry, Chapped Lips
Facial Sunscreens You'll Love Wearing (Really)
19 Super Pretty Valentine's Day Makeup Tutorials